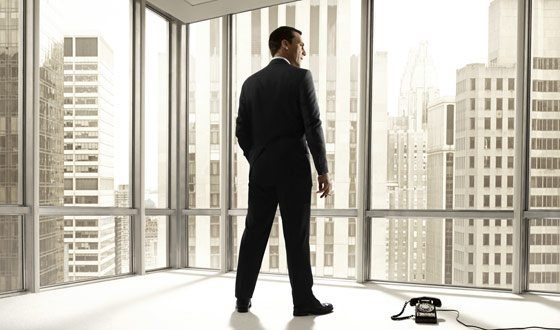 First of all, I only started watching AMC’s Mad Men a few months ago despite hearing lots of great things about the show. The first time I saw bits from the show was during Season 3, with the hilarious lawnmower scene and then Souvenir, which was pretty much a January Jones highlight reel.

So I waited patiently for a moment to give Mad Men a shot. This year, thanks to new Latin American channel HBO Signature (the show airs on HBO in Latin America), I finally got to see it in its entirety and it’s really worth the watch.

Season 4 represents a fresh start for Don Draper (Hamm), as by the end of Season 3 he has divorced Betty (Jones) and founded a new advertising agency, Sterling Cooper Draper Pryce, along with Bertram (Morse), Lane (Harris) and Roger (Slattery) while also having a handful of his previous Sterling Cooper co-workers — Peggy (Moss), Joan (Hendricks), Harry (Sommer) and Pete (Kartheiser) — joining him at his new agency.

As it happens with new advertising agencies, accounts come and go. Despite having Lucky Strike in their hands, most of the season sees SCDP struggling harder than ever with gaining/retaining accounts and even dealing with life-threatning situations against the agency.

“Who is Don Draper?”

Season 4’s opening line sets the tone for Don Draper’s identity theme on which the entire season revolves. Unlike the past three seasons which showed Don as a confident smart playboy who dealt with plenty of obstacles, he is now stuck in a downward spiral. As you would expect from Don after getting divorced, his drinking increases and his womanizing is taken to another level as he meets and sleeps with lots of women throughout the season. But even worse, he goes against his stritct moral code at work. Some of his actions make him look pathetic and even endangers SCDP as well as his own “hiding the past”  gig (Season 4 shows in flashback how Don arrived to SC) he’s been doing since Season 1.

As Don Draper hits rock bottom, Jon Hamm’s acting is sharper than ever. He flawlessly commands the scene as he shows a less flattering side of Don. Both Hamm and Elizabeth Moss were phenomenal in The Suitcase (one of the strongest episodes from the entire series), which tipped its hat towards past seasons and focused on Don and Peggy’s mentor/apprentice relationship, ending with both characters bonding more than they ever did before and providing plenty of food for thought.

The rest of the characters had interesting storylines. Pete, while still unlikeable at times, matures during the season and deals with impending fatherhood after a year of infertility. Lane sees his work (and an affair) clashing with his marriage. Peggy’s workload increases while she deals with relationships of all kinds (Don, romantic interests, co-workers, etc.). Roger’s debauchery continues, but he rekindles his relationship with Joan. Behind the “seductive woman” mask, Joan’s fragility is shown when her husband leaves for Vietnam. It not only affects her emotionally, but she also begins to look “weak” at work.

On the other hand, the non-SCDP moments show Henry Francis (Christopher Stanley) learning what it’s like to be married with Betty. Betty — still an awful person with a childlike mindset — is shown a lot less this season, which is a good thing. Yet her presence and behavior translated into watching a more rebellious side of Sally Draper (greatly performed by Kiernan Shipka).

Mad Men‘s production values are still great along with its excellent storytelling, but it’s also great to see how the show links itself to modern issues such as the current global economical climate or the Vietnam War backdrop linked with the Middle East military intervention.

Overall, Season 4 rivals Season 1 for the best season in Mad Men‘s history so far. It’s a big improvement over Season 3, which suffered from focusing a lot on Don and Betty’s marriage. The season finale (Tomorrowland) may not be as game-changing as the Season 2 finale — which had SC sold — or Season 3’s finale leading to SCDP’s foundation. However, it cleverly ties in with Don’s previous actions and leaves us with many questions regarding the characters heading into Season 5.

P.S: Extra quarter star thanks to The Suitcase. I always loved Don and Peggy since the start and this episode was glorious.