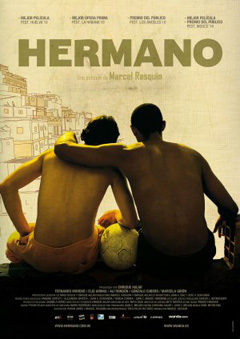 Hermano tells the story of a pair of non-biological brothers. Found in a dumpster and saved from a terrible destiny, Daniel (Moreno) grows up to become an exceptional footballer next to his brother Julio (Armas), who is the captain of the local football team. Both dream big of becoming football stars on the Venezuelan team, and their mom never doubts it.

However, Daniel and Julio are walking completely different paths, as Julio is casting a shadow over their future, and people keep telling Daniel to go for it on his own… that way he’ll be able to help his brother better. Despite the incentive, Daniel doesn’t turn his back on his brother.

There’s a lot of bad information about blood being thicker than water — yes, it’s a saying, but it’s meaningless. Blood has nothing to do with it. It’s all about the relationship people establish with each other. In the case of Hermano, it’s about these boys who grew up as brothers, under the same roof and raised by the same mother, going in different paths but merging.

Hermano is an easy film to relate to, especially during the current circumstances of many countries in which we could go out, but never know whether we’d be back. Julio’s reality is grim: member of a gang and making a living out of it — he doesn’t mean any harm, he even keeps other crazier people in check until his sanity is suddenly gone. The film is all too familiar — a family in the middle of all the urban violence and the people trying to make it out of it.

Moreno and Armas have nice chemistry and their tension is harsh on the audience because no one wants to see brothers fight — if you’re interested in seeing brothers fighting go check out Taegukgi with its suffocating brotherly story. Art house lovers will find it common, of course, it’s neither brutal in its violence nor too social-conscious to criticize what’s happening in their communities, looking for a scapegoat. Instead, it seems to hover more on the side of melodrama with its blunt message of fraternal love. In the end, Hermano is pretty telenovela and maybe too sentimentalist for some. The average moviegoer will be able to relate to it, though. They will love it, gasp and even be able to tear up by the end of it. After all, we’re all too familiar with these characters.