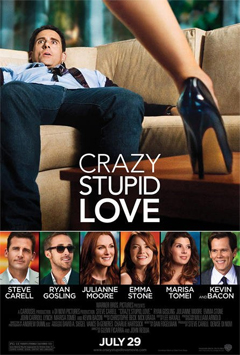 We’ve all heard dozens of sayings about love – it’s a bitch, it’s a game, it’s worth it. Who’s to say love isn’t all of these? While you may not expect much from it, Crazy, Stupid, Love. turns out to be a surprising treat, delivering a truly solid romantic comedy to the screen.

Cal (Carell) is a happily married man – until he finds out that his wife Emily (Moore) is having a mid-life crisis, wants to get a divorce, and slept with another man. This shatters him, sending him out the door and into a bar where he consistently talks about his wife and children while drinking his sorrows away. In comes Jacob (Gosling): a young bachelor who invites him over for a drink after noticing the others loss of dignity, and offers to help Cal regain his manhood and get over his wife.

However, the film covers various storylines and characters in a way that comes across simply. There’s the budding romance between Jacob and the lovely law student Hannah (Stone), the entanglement between Emily and her coworker David (Bacon), and Cal’s son Robbie – who has a crush on his older babysitter Jessica (Tipton). It may seem like a lot for a movie, but it portrays them all with ease, depicting the differences of love through generations.

Dan Fogelman steps up his game plenty after writing multiple films for Disney – most recently Tangled – and both Ficarra and Regua follow up their stunning work on I Love You Phillip Morris with this eye-catching piece. Balancing between romance, comedy, and drama – barely anything in this feels forced. It’s unique and authentic, and while it does dive into a few certain stereotypes, it also reverses a few, letting certain scenes play out in unconventional ways. It’s no surprise that a lot of care was put into making this film work, and the balanced writing really shows that off.

But not all can be attributed to the writing, as the performances from everyone in this helped make Crazy, Stupid, Love. as marvelous as it is. Steve Carell does a wonderful job giving us a dramatic character while still maintaining the comedy factor that makes us love him so much. He still feels familiar to his other roles but delivers his lines perfectly, making him a character we can truly feel for from beginning to end – in good times and bad. However, it’s Gosling who surprises the most. Shirt on or off, he shines in every scene and gives us a sex-magnet who is as deplorable in his picking up of women as he is loveable in his pure chemistry with everyone around him. Removing him from the equation would result in a mess, as it’s his presence that truly boosts both Carell and Stone’s performances in the film.

It will come as no shock to anyone who has seen Easy A that Emma Stone is hilarious. She adds the perfect amount of tenderness to her role, but also pumps out the comedy relentlessly. The chemistry between Gosling and Stone is superb – most notably a scene involving Dirty Dancing that you’ll just have to see for yourself. When it comes to Julianne Moore, it goes without saying she always gives a great performance – especially in the drama genre – and does no differently in this one. Although Tomei’s character might have been a bit too wild and Bacon’s a bit too unnecessary, they still bring a few laughs and tension to the film, and the younger actors, Tipton and Bobo, do well for their roles – keeping their story cute, funny, and even a bit sad at times, while still adding extra depth to the other relationships.

There is no doubt this film will surprise many and at the risk of sounding cheesy and clichéd, Crazy, Stupid, Love. reminds us that no matter how many crazy things might happen, the stupidest mistake one could make is to give up on love.