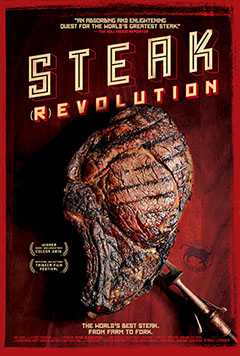 Note: Only for the strict meat-lovers.

Meat can be a passion for some, as we hear the sizzling of the meat as it hits the perfect grill. It sizzles some more as the smokey flavor penetrates the marbled savory goodness.

Director and producer Franck Ribière also loves it, so he got together with his favorite French butcher Yves-Marie Le Bourdonnec to find the most delicious steak. To Le Bourdonnec’s surprise, French steak isn’t as priced as he grew up believing, so the meat-loving duo went globe-trotting to the steak capitals of the world– Argentina, Brazil, the United Kingdom, Scotland, the United States, Canada, Japan, Spain, Italy… I honestly didn’t know Sweden or Belgium were known for their viandes.

Steak (R)Evolution is a look at not only the state of the global meat industry, but it also explores the crisis of the French red meats (apparently more suited for boiling than grilling), livestock breeding, and meat-eating habits. No judging, but a lot of debating. Which is better, grass-only feeding or grain-feeding? Purists will tell you livestock would be naturally fed only with grass, but the final results — spoiler: crowning this massive Rubia Gallega as the steak king — might surprise the skeptics… or utterly shock them.

For cattle-ignorant people like me, the -rather lengthy- documentary includes tons of information of types of bovines fit for consumption; for example, I didn’t know Brazilians had the Indo-Brazilian Zebu as one of the choices for the famous Brazilian steakhouses, mainly for the cattle’s resistance to heat and parasites [1], despite their lower-quality meat. Moreover, I didn’t know Kobe-styled or international Wagyu had spread in the world because of a possible Wagyu-sperm lab leak— Spermgate?

The biggest problem with Steak (R)Evolution? It’s a nearly 2hr. piece that could use some trimming with an added treatment for their left-aligned French intertitles with English subtitles, making the usual subtitle-reading a bit more of a messy chore than it usually is. Instead of a buttery steak that melts in your mouth, it might leave you with a heavy stomach.

But that you’ll leave learning something, you’ll definitely learn something.

Steak (R)Evolution is right, we’ll have to eat less meat and it will increasingly become more expensive, like all food groups. But with moderation it will all beat In Vitro Meat.