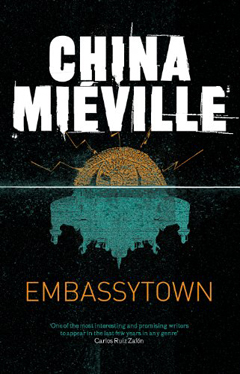 In the farther reaches of space, there is a planet whose peace relies on a diplomatic speech between the aboriginal population, called “Hosts,” and the humans and other aliens who have settled there. The Hosts can only talk through Ambassadors, beings engineered from birth to interpret a language that is practically impenetrable to others. However, when sudden shifts in the meanings of words are introduced, the ensuing dialogue provokes violent revolution.

I read this book in one sitting, partly because it was due at the library and couldn’t be renewed, and partly because it had an engaging story that flowed much faster than Miéville’s previous work, Kraken. The author’s Socialist politics are evident in all his novels, and here “opium of the masses” is taken to an imaginative extreme. The first fifty pages were well-composed but somewhat inert, as the reader settles into the backstory of the narrator, Avice Benner Cho. She does not possess the most exciting personality, but her distanced and efficient narration fits her academic perspective — and may be her way of dealing with the events she reports.

Eventually the characters’ (and readers’) conceptions of definitions and relationships are rapidly overturned. Miéville fills the book with astounding feats of linguistic exploration and fashions the plot with his characteristic consideration of consequences and implications. However, one might wonder how the novel’s treatment of refashioning minds and mind poison might fare when compared to actual historical events.

For those who have read the book, I have one question: do you think the Arikei produced music as well? For such a thoroughly thought-out book, Miéville might have missed a great opportunity in describing the musical aspect of their culture.