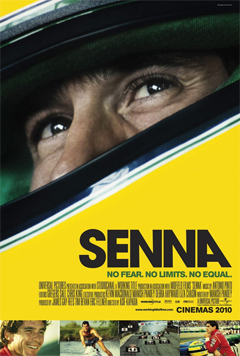 If you’re looking for any excuse to race on over and watch this documentary, I’m going to go ahead and give you the green light. Aside from being an extraordinarily made film, Senna is undoubtedly successful in appealing to both Formula 1 fans and casual viewers who may know nothing of Ayrton Senna and his driving career.

Almost two decades after the passing of Ayrton Senna, director Asif Kapadia brings to film the life of this fascinating man — widely regarded as one of the most brilliant Formula 1 drivers ever. What is impressive about this documentary is the way it weaves hours upon hours of archival footage into a dramatic narrative that tells this man’s story. While it does heavily feature the sport of racing as well as its politics, Senna spends its time examining this rising sports star who wanted nothing but to race and win.

The film shows the many sides of Ayrton Senna, taking us on a drive through his life. Born to a wealthy family in São Paulo, Brazil, Senna was instantly attracted to driving and had dreams of becoming a racing driver. As a young man, he began with go-kart driving and championships until he was approached to join Formula 3 for the ’83 season, followed by Formula 1 the next. It takes no time for him to rise to greatness and stardom, always remaining patriotic for his country and grounded in his love for God and his sport. Of course, not all is good in the life of Ayrton Senna. The film also dwells on the politics of racing for some time — especially the many issues that Senna had with the FIA, as well as his rivalry with former teammate and French World Champion, Alain Prost. Unfortunately, all good things must come to an end and Senna comes to a close soon after his tragic and untimely death at 34. With all of the footage shown, there is no doubt that Ayrton Senna was — and still is — regarded as the greatest motor racing driver of all time.

It isn’t hard to see that Asif Kapadia — director of Far North and The Warrior — knows exactly what he’s doing. Senna is one of the few documentaries that is purely made up of archival footage. Many stray away from past videos and cut to interviews or reenactments, but Kapadia truly knows how to pick and choose just the right scenes to deliver the intensity and emotion that a man like Senna deserves. The footage is structured in just the right way — making the biopic almost like a scripted drama that involves and absorbs the audience into his life. The use of home videos, television interviews, and even in-car camera footage from the races all work to weave together this tense and personal tale.

Another wonderful aspect to the documentary is the use of voice-overs in addition to the archival footage. Without having to awkwardly cut to any newly recorded interviews or footage, our eyes are left to focus on the images of the past we are shown — whether it be an intense race scene or just a simple outing at the beach. The most notable contributions for the film’s voice-overs were Senna’s sister Viviane, McLaren’s team principal Ron Dennis, F1 team doctor Sid Watkins, and Brazilian commentator Reginaldo Leme — all of whom helped to shape the image of the man we see in the film through anecdotes and insightful commentary.

Asif Kapadia’s Senna truly shows audiences the raw potential of a man like Ayrton Senna in a moving and captivating way, and while it falls under the documentary genre, it amounts to much more than that. Much like the legendary man himself, this film will have no trouble attracting the attention of all its viewers, as well as entertaining them from beginning to end.