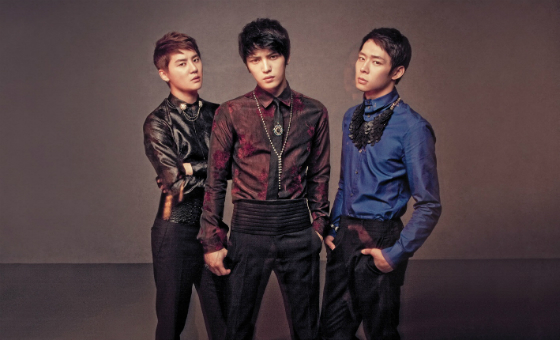 After a long world tour that included several cities in Asia, the US, and one stop in Canada, JYJ closed their tour with two stops in Europe. Finally, a real world tour in the truest sense of the phrase!

Barcelona had the pleasure of experiencing the trio in the beautiful and open Poble Espanyol. In Berlin, JYJ played in the very intimate Tempodrom. Housing 3000 ecstatic fans from all over the world, the venue was filled with fans from all over Europe and also from Japan, China, the US, Russia, Argentina, Brazil and Peru. Fans had done the utmost to attend this concert (me included).

That’s not surprising seeing as this is Kpop history in the making…yet again. With SM holding its immensely popular SM Town concert in Paris, the way for hallyu was opened in Europe. So JYJ took a chance and came over to our continent. A most generous gesture, seeing as neither of the dates were fully sold-out. I say generous because they really didn’t need to come to Europe to play – just a few weeks before the European tour they played for over 80 000 fans in Japan. Compared to that the 6000 people that saw them in Europe is nothing. But it’s not all about the numbers really, just about the fact that they recognized that they do have fans outside of Asia.

I must add, I am glad that I was able to see them in a smaller place. Last I saw Junsu, Jaejoong and Yoochun on stage, it was amongst a crowd of 10 000 people. This day I was able to be closer, feel them nearer and I was far from disappointed. If anything I was left wanting more.

How could I not when JYJ are such great performers live? From their voices, to their dances, to what they were wearing. As a fan, I can always drool over the videos of their live performances but seeing them live… I know that I might be sounding too biased right now, but it’s the truth. JYJ took over Tempodron, amazed us with their dance-tracks, mesmerized us with their ballads, amused us with their talk. But sadly it was all done in two hours. Too little if you ask me, but still longer then some other bigger bands that visit Europe *cough*RihannaBritneySpearsRedHotChiliPeppers*cough*.

It was a very intimate and personal concert. We, the fans, felt closer to our beloved idols, and JYJ entertained us and gave us amazing memories to live by.

P.S No concert pics because of technical issues! I am truly sorry! But! I do have a video from the press conference that happened D.S