We keep on celebrating the YAM LGBT blogathon with more giveaways. This time you can be the lucky winner of Andrea Speed’s mystery/suspense novel Shift (the eBook not the paperback).

Here is what you can win: 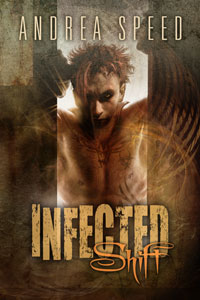 In a world where a werecat virus has changed society, an ex-cop named Roan McKichan, born infected, works as a private detective trying to solve crimes involving others who are infected.

Between his mutating virus and his rocky relationship with his artist boyfriend, Dylan, Roan has enough problems to solve without taking on other people’s, but that’s the nature of his work. Someone has to look into the case of the murdered trans woman, and if the perp is the dirty cop Roan suspects it is, the police are not the right people for the job.

But now Roan has a new obstacle to overcome: someone caught part of his transformation on video, and the media frenzy is making it hard to do his job. One case nets him a hockey team full of new friends. Another leads to an attempt on his life. And Roan’s hustler sidekick drags him on a quest for revenge. With his world and his body both in turmoil, Roan is finding it harder and harder to see the line between justice and vigilantism.

If you are interested in buying Andrea’s novels, then you can head over to Dreamspinner Press to do so.