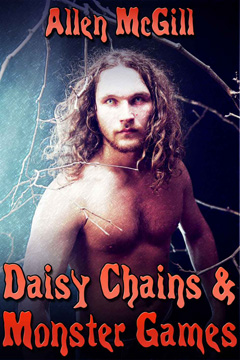 Humanity is a consortium of thoughts and feelings, and we’re all trying to get our voices heard. This seems to be the central theme of Allen McGill’s Daisy Chains and Monster Games. This anthology introduces a wide range of characters and stories, each one meant to appeal to a different type of reader.

McGill is indeed a talented writer. He’s got a sharp eye for storytelling, definitely a great understanding of vocabulary and the whimsy inherent in language. Each story has a moral that’s easily ascertained, however, for the most part, neither preachy nor belligerent as is the wont of many newer authors looking to ensure an audience “gets them.” Daisy Chains and Monster Games is the type of anthology that offers various perspectives on many of the questions that plague us, from what it is we truly need to be happy (Luck and Blarney) to how we would ever survive without the lessons our mothers taught us (The Benevolent Brainwasher).

It’s an intriguing prospect to have this much diversity in terms of actual concept. That being said, grouping these stories together raises a few questions. Yes, the concept of an anthology is to house a group of seemingly unrelated stories; however, this anthology seems to be missing the basic ingredient: thematic connectivity. There isn’t exactly a single thread to connect all these stories. In fact, there’s nothing here to suggest that there’s a reason for the stories to be grouped together at all.

Daisy Chains and Monster Games as an anthology doesn’t elicit a particular response from the reader. There are stories that shock in their gritty realism (Hero), those that strictly entertain (All Star Cast), even stories that explore a deeper existential crisis of identity and historical significance (New Year’s Baby). However, most if not all of the stories never give us a real resolution, more a hanging send-off that seems to ask the reader to ponder the possibilities and the story’s significance in the group. Though the “what if” at the end of each story works for some, resoundingly it just feels as if many of the stories are unfinished or, more glaringly, unnecessary in the grander scheme of the collection.

The blurb for Daisy Chains and Monster Games promises a “hodgepodge of characters”, proclaiming “there’s something for everyone!” The stories themselves are actually well rendered bits of fiction; however, the folly inherent in attempting to appease a ubiquitous readership is each type of reader will only be inclined to read one or two stories, then put the volume aside. It’s almost a shot in the foot to neglect that at some point the stories should connect at least on some thematic level. For instance, Alvin Schwartz’s Scary Stories to Tell in the Dark focuses on urban legends and folklore from all over the world (various authors of origin and resolutions but a shared theme), Lou Beach’s experimental 420 Characters offers over 150 micro-stories written in 420 characters or fewer (physical connectivity), even the tried and true “Best of” anthologies have literary canon in common.

The stories work on their own as well-written pieces of fiction. Grouping them together, however, weakens their overall significance. Perhaps the underlying thread sewing these stories together is that of humanity’s unpredictability. If such is the case, Daisy Chains and Monster Games succeeds resoundingly, as each story and how it connects with the next is most certainly a mystery.