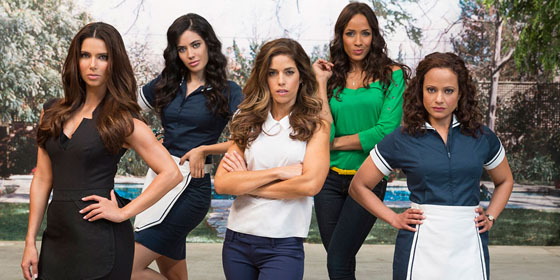 Back when Devious Maids first started airing, people had their suspicions about a latina-led series about maids that proved to be pure poppycock as the show started its rating momentum raising nearly 70% in audience by episode 6 (Walking the Dog) which finally got me pumped [1]. Not bad for a show with loads of latinas, no?

The show, very much a la Marc Cherry’s Desperate Housewives, begins with a mystery~ someone’s death. In this case: Flora (Paula Garcés), a young woman murdered at the Powell’s party, where she worked as a maid.

Inspectors arrive and do their business, when matriarch of the house — Evelyn Powell (Rebecca Wisocky) — darkly lit showing the devastating position she’s in as the evidence is being gathered. “What do you mean you’re done? All this blood on the furniture, on the carpeting?” It’s a terrible situation to be in, an almost traumatic one. “I don’t care about photos. I don’t care about evidence! MY MAID WAS MURDERED!” Evelyn exclaims hysterically. Almost as if in a stupor she adds quietly “who’s going to clean all this up?” It is then you know you might be back in Bree Van de Kamp’s world.

Introduce new maid in town, Marisol Duarte (Ana Ortiz) who starts working for the Stappords (Brianna Brown and Brett Cullen) and is too interested in Flora’s murder to be merely neighborhood women gossip, when she enquirers about the situation with fellow maids Zoila (Judy Reyes) — aid at the Delatours (Susan Lucci and Drew Van Acker) alongside hija Valentina (Edy Ganem); Rosie (Dania Ramirez) — aid at the Westmores (Grant Show and Mariana Klaveno); and Carmen (Roselyn Sanchez) — aid at Salsa sensation Alejandro (Matt Cedeño) to the headaches of his Russian housekeeper Odessa (Melinda Page Hamilton).

Man, if anyone should be offended by their representation, it’s the white rich people, or that’s what I thought at the beginning as the latina women moved the chess pieces around the lives of their bosses and their dirty little (or not so little) secrets. But slowly, characters gained strength… especially the hilariously perverted Powells whose house is without a maid and becomes the center of our attention, and Marisol’s.

The problem I’ve had with Devious Maids is consistency. From the first six episodes, I was game for Ortiz and Reyes. Though the writers have had Zoila on a loop; testing her strong bond with boss Genevieve (and Lucci is somewhat funny at times — like on ep12 as she remarks her confusion at finding a gray hair in her wig) as well as the relationship with daughter Valentina and Valentina’s own feelings for her boss Remi — she;s been kinda boring, but they made up for me caring for Rosie and her making up with Marisol, who at that time had been already revealed to be someone else. It still doesn’t mean I give a flying fish for her relationship with the Westmores.

Being the “Susan” of the group, I had grown weary of Sanchez’ Carmen, but was gladly surprised with the development that Odessa and Alejandro had in some of the episodes I liked less (ep08 + ep09), especially the part where Odessa reveals some of her backstory. Outstandingly, I saw myself growing closer to the blond one- poor Taylor Stappord who’s just in the middle of all this dirty mess besides having to deal with her husband’s ex, the poor and delirious Olivia played by Valerie Mahaffey who has this type of character pegged down to a tee as she also played Alma Hodge for the DHverse.

The last episode of the season airs next week, but my mind is pretty fixed on my thoughts this time around. Depending on how it ends, I might tune in for a couple more of the next season. I’m most interested in seeing what they do with Marisol because I don’t want to see Ortiz out of a job!