In spirit of the last day of the YAM LGBT blogathon, we are doing a ton of giveaways today. This time around, Elizabeth Noble is offering one free eBook from her Dreamspinner Press collection.

So here is what you might be able to win: 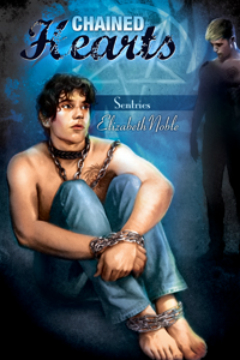 Todd and Nick Ruger are alive and on the run in the Yellowknife Protectorate, but maybe not for long. After narrowly escaping New Colorado, where they were implicated in the assassination of Chancellor Shaffer, they’re running out of steam: Todd is gravely ill and Nick’s injured. Just when it seems like the harsh winter will get the best of them, they find refuge with a doctor in the isolated town of Elk’s Ridge.

On the surface, Elk’s Ridge seems the ideal place to rebuild their lives. Nick begins training as the doctor’s apprentice, and Todd works in a lumberyard until they’re recovered enough to return to their duties as Sentries. They make friends, forge a new life, and most importantly, there’s no sign of anyone from New Colorado.

They should have known it was too good to be true. Victor Raleigh, the new Vice Chancellor of New Colorado, knows all about Nick’s psychic abilities, and he wants them in his corner. When Nick is betrayed and captured, Todd sees no alternative but to head back to the war zone to rescue him. But will Nick be the same man Todd loves after Raleigh’s pet psychic vampire is through with him?

Elizabeth has several books in her collection so head over to her author page to see what you can win, pick one book, comment here with the title of the book you wish to win and Elizabeth will draw a winner on Wednesday.