Peru is still a highly conservative society. Predominantly Catholic — and predominantly male-centric — where serious discussions of sex and LGBT issues are seldom presented in the mainstream, even if it’s so common to see semi-nude women on TV or yellow press newspaper covers.

Janet Jackson’s nipple scandal has nothing on us.

I can’t really remember when the first time was I ran into the term “LGBT,” but it sure wasn’t on my radar during high school… which is around the time that the first edition of OutfestPeru came into being. I didn’t actually realize there was an OutfestPeru until 2009, when I read of it on our affiliate site Cinencuentro. You see, unless you actively seek it out, it’s hard to find information on film events that might interest you… let alone LGBT film events.

It’s not as if you’re turning on the TV to watch Cinescape with our trustworthy pal Bruno Pinasco, and he will suddenly tell you that OutfestPeru is about to start. It’s also not very common for film distributors to bring LGBT-related films to be promoted on Cinescape — the last films that were brought that I freshly recall were A Single Man, and — maybe — Chloe (2009). Both had a fairly limited run.

So what better way to spread the worldwide LGBT to love than to talk to the person in charge of OutfestPeru, which is about to start its ninth edition this month! Being busy with the makings of the event, Rolando Salazar was kind enough to answer some questions. 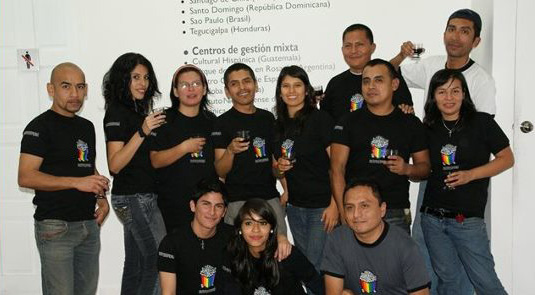 In 1999, I joined a group of friends for a week-long LGBT cultural activity called Encuentros con el Arte (Encounters with Art), where I was in charge of the film section. Noticing it was the section that garnered the most people, I thought of setting up an event specifically to tackle LGBT cinema.

It’s this way since March 2004 that we hold the Gay Lesbian Trans Bi Film Festival in Lima, known as OutfestPeru.

Who else works at OutfestPeru?

Usually, it’s always been a group of friends. The people whom I worked with in Encuentros Culturales help me a lot, in regards of cultural centers. For specific issues of the production and the logistics, we have Javier Brañes, José Mendoza and José Santos.

During the actual festival, we count with a team of volunteers, who are usually lesbian friends met during the event: Veronica Ferrari, Eliana, Toto Alvarado, and Pilar Rojas. I can’t help but also mention the invaluable support from the Red de Cine LGBT (LGBT Film Network), which we are part of. Without them, we wouldn’t have access to much of the material we exhibit.

How was growing up without such cultural LGBT-related events?

There were LGBT cultural events, like I said there was Encuentros con el Arte where I started learning all about this. However, I do admit that the frequency in which it ran was a little spacy, and you can’t find funding either. Luckily, in OutfestPeru we managed to get some consistency with a constant run a year.

With the success of films like Contracorriente, winning the audience award at the Lima Film Festival, do you see a shift in the Peruvian public for these kind of films?

Not really, Contracorriente could have had a temporary effect just like No Se Lo Digas a Nadie had in its moment. The audience in OutfestPeru is mostly people that are already interested in the topic.

What can you tell us about this year’s program?

We will count with the usual showings of short films and documentaries that will melt your heart, without ever forgetting the feature films.

We’ve got the highlights of a couple of musicals — since the first time that we began showing films, they haven’t stopped coming — a documentary of LGBT activists in China, which reminded me a lot of what we went through here; and generally, a selection of titles that are made to switch something on within you — the activist within you.

The idea behind this is so that you’re not left indiferent after the movie, it has to spring something within you. The happiness, the sadness, or the courage to do something.

The ninth edition of the Lima OutfestPeru is set to begin on June 19th through June 29th at Centro Cultural de España and the Teatro Julieta in Lima. You can visit their Facebook page to follow their latest updates.