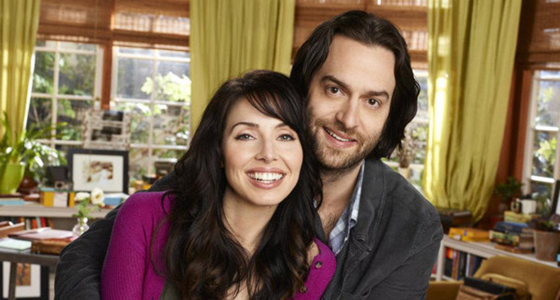 I thought Ashton Kutcher would be the worst thing anyone would see on primetime television for the 2011-2012 season, but I was wrong. Whitney Cummings is actually much worse than Ashton Kutcher on a different scale.

While anyone with a brain wouldn’t be surprised to see Kutcher sucking on Two and a Half Men  and making Jon Cryer and Judy Greer look bad while they’re paired with him — I’ll admit it’s a guilty pleasure of mine thanks to its supporting cast — Whitney is much worse for a different reason. She managed to get two pretty awful TV shows created on primetime television.

First, there’s 2 Broke Girls (CBS), created by both Cummings and Michael Patrick King (Sex and the City), starring Kat Dennings and Beth Berhs. The premise is simple: two waitresses are working at a Brooklyn restaurant and trying to save up money ($250K) for opening a cupcake shop. One comes from a working class background, the other used to be rich until her dad got caught for operating a Ponzi scheme. By the end of every episode, you get to see how much they saved or lost.

I like Kat Dennings and her tits, but the pilot for 2 Broke Girls was easily one of the worst pilots I have ever seen in recent years. Fucking rough scripting, borderline stereotypical and raunchy, bad supporting characters, almost laugh-free (whoever wrote that Coldplay-hipster joke should burn in hell). The show managed to make all the current CBS comedy shows that get a bad reputation look decent to amazing in comparison.

Cummings and King co-wrote the pilot, so both are to blame for this crime. The third episode of 2 Broke Girls is bad, but less horrid than the first two thanks to neither of them writing the script. Evidence that King may not be good for this show:  he wrote the screenplay for both Sex and the City films on his own.

Three days later, NBC premiered the other Cummings show, Whitney. The show follows Cummings — playing a fictionalized version of herself – and her supportive boyfriend (Chris D’Elia). But given that she begins to fear “relationship boredom”, she tries and does anything to spice things up for her relationship.

Guess what? Whitney Cummings cannot work the “playing yourself” gimmick well at all — it’s not an easy one, for sure. And Whitney was even more devoid of humor than her other show, which at least had a somewhat better premise and a good lead actress. I also feel bad seeing Jane Kaczmarek (Malcolm and the Middle) working with that sack of shit. Whitney is pretty much a massive taint for NBC’s Thursday line-up of comedy shows, which includes far superior shows such as Community, Parks and Recreation and The Office.

Talk about killing any credibility you had in less than a week.

Short summary: Whitney Cummings is not funny at all and both her shows should be axed, unless something extremely dramatic happens and she gets some huge upgrade — but that seems very unlikely right now.

P.S: Sorry, Juan. I know you hate Whitney too and my blog title could have been something you would have used.