Gal Gadot has officially become the highest ranking actress at the box office of 2017, thanks to Wonder Woman and Justice League. Overall Gal is the third highest grossing actor following Dwayne “The Rock” Johnson at second place and Vin Diesal at first.

Netflix’s Bright has had a strong opening weekend with 11 million views in USA. Not bad, considering all the terrible reviews! David Ayer sure was a good sport about them~ 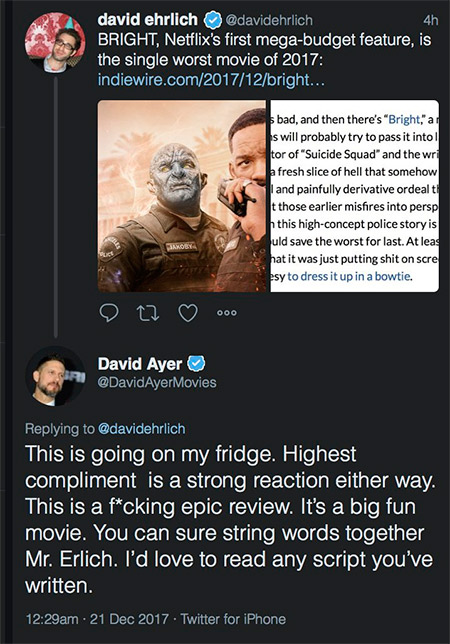 HBO’s Game of the Thrones is once again the most torrented TV show of the year! Number two is, of course, The Walking Dead. The Flash, The Big Bang Theory and Rick and Morty round off the Top 5.

According to Joe Russo, Avengers: Infinity War will be a story about sacrifice and pain. Because he want us fans crying.

For us, its very important that the heroes feel pain and that they make sacrifices because I think that, not only is it great storytelling, but it also is inspiring and I think we need a lot of inspiration in this world right now.

Yay! Star Wars: The Last Jedi surpassed one billion dollars at the box office! It’s now the #1 top-grossing film of 2017. It’s currently the fourth fastest to reach that checkpoint (behind Furious 7, Jurassic World, and Force Awakens), but the second fastest to do so without the help of China, behind the Force Awakens.