I do have one huge post about the Korean dramas I saw last year, as well as several reviews of said dramas, that I need to post. I will get to it… eventually. But as of right now I am a bit busy watching Dream High 2 and Shut Up: Flower Boy Band.

The cast of Shut Up: Flower Boy Band and Dream High 2

Dream High 2 is, of course, the second season of the very famous Dream High drama that was aired last year. One of the very few exceptions when it comes to a second season. But what is different about Dream High 2 is that it is a completely new story to the original. Sure, the premise is the same and so is most of the core story (about youths seeking to make it in the entertainment industry), but the actors are new and we are in for a completely new adventure. I have had my hopes high about this drama, seeing as darling Kang Sora is the lead actress. She blew me away in Sunny, so I was really dying to see what more she could do. I am already aware of Shim Eun-kyung’s body of work and I adore her as an actress, but Sora is the one I am keeping my eyes on. As with Kim Soo Hyun, perhaps Dream High might be what shoots her to greater popularity. She has proven to be good, so let’s see what more she can do. Joining her in this drama is Jinwoo from the Korean group 2AM. He is a rookie actor, much like Suzy from Miss A was in the original Dream High. But after two episodes, I have nothing to complain about. So far his acting is solid. The rest of the cast consists of more rookie actors, yet to debut idols, idols with acting experience and idols without it. A very varied cast, the same as it was last year. 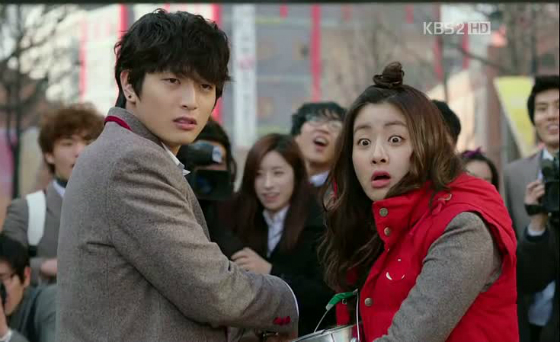 As I said, after two episodes, I am digging the drama. It has that youth flavor, the music and the silly friendships that made Dream High so lovable. I guess it’s a bit too much to ask for Dream High 2 to be as epic as Dream High, but we still have six more weeks to go.