This Kdrama season is starting off with a great bang. Many hyped dramas have debuted during January — besides Dream High 2 there’s also The Moon That Embraces The Sun (which I will be talking about tomorrow) and Shut Up: Flower Boy Band. 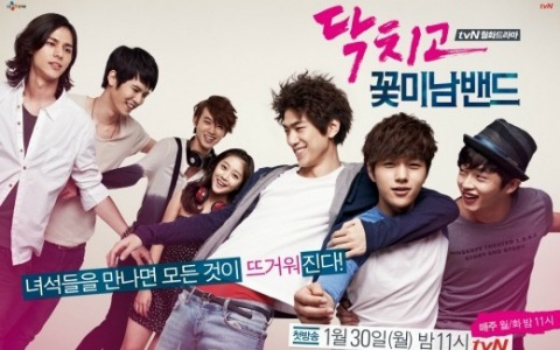 This drama is so hyped because it’s made by the same network that produced one of last year’s Kdrama hits, Flower Boy Ramyun Shop. tvN is a cable drama network that has done well with some of their original dramas. Some of the dramas they did last year — along with Flower Boy Ramyun Shop — were I Need Romance and Manny, all of them dramas that I watched and really enjoyed. I will get more into them in my Kdrama feature that I am still working on (so many Kdramas, so little time). Seems like tvN has found a niche with the “Flower Boy” premise (then again, who doesn’t like pretty boys?) and is expanding on it. Flower Boy Ramyun Shop was fresh, funny and lovable. There was nothing original about the story and I will admit that I had some issues with the plot. But in all I really did like it. 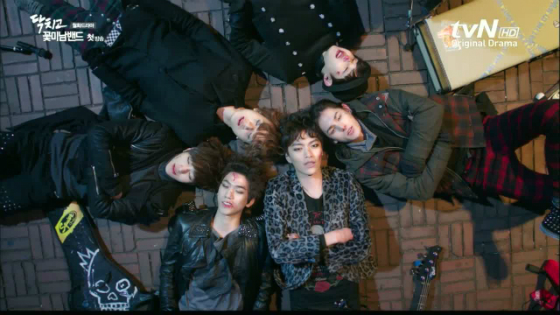 The pretty boys from the band.

The story of Shut Up: Flower Boy Band is a bit more serious than Flower Boy Ramyun Shop. It is still a “likeable” youth drama, but it’s a bit darker. The pretty boys that are in this band are all kind of delinquents that have issues at home. I guess many can relate to being young, passionate, misunderstood, frustrated and carrying a huge chip in their shoulders about their parents. The first two episodes are intense. I must say that it’s strong competition for Dream High 2. They are both competing for the same age group with the same kind of stories. So who will reign supreme? It’s going to be some very interesting weeks.

That is it for me with my new segment about my obsession with Kdramas. I hope you stick around for the ride. Tomorrow I will post about my biggest obsession this Kdrama season – The Moon That Embraces The Sun. I have so much to say about this amazing drama, I don’t know where to begin. Stupid me for not getting it done weeks ago. Work and life got in the way. I’ll see you guys tomorrow!