Our Fave Poker Scenes on the Big Screen

When you think about it poker and the movies is a marriage made in heaven. After all, at the heart of every game there’s that major driving force behind drama, namely conflict. Plus it’s a game where there can be dramatic and sudden changes of fortune literally on the turn of a card.

And, finally, it allows us a great insight into the true nature of a character in the way that they play the game itself, perhaps revealing more about what motivates and drives them far more accurately and succinctly than pages of dialogue and exposition.

So it’s no big surprise that the game features in so many movies, sometimes at the heart of the action and often as a driver for a key turning-point in the plot, usually presented in a way that makes sure that even viewers with very little knowledge of the game can get the gist of who is coming out on top.

There are literally hundreds of films we could choose from but we’ve homed in on these four classics that put you right at the heart of the action. 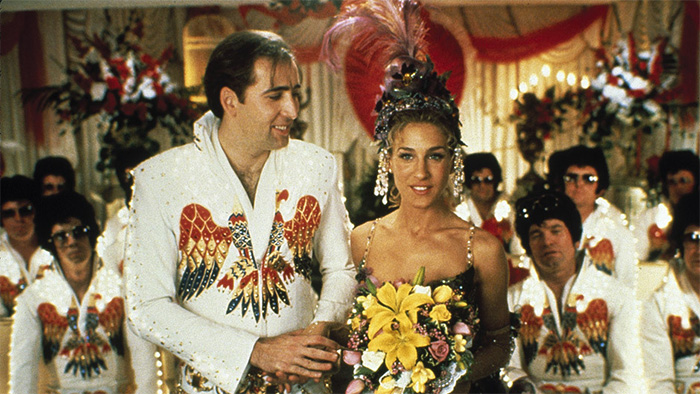 The 1992 movie starring James Caan, Sarah Jessica Parker and Nicolas Cage – in a very different role to his much darker Vegas movie Leaving Las Vegas – is one in which poker certainly is instrumental to the plot.

Cage plays a character called Jack Singer, who is in the city to marry his fiancée Betsy Nolan. When a widowed professional gambler called Tommy Korman (played by Caan) sees Betsy, he’s struck by how much she reminds him of his late wife, so he sets his heart on winning her over.

To do this, he arranges a fixed poker game in which Cage loses heavily and ends up owing him $65,000. However, Korman agrees to erase the debt if he can spend the weekend with Betsy. For the rest of the film Singer has to jump through a number of hoops, and even out of a plane dressed as Elvis, to win her back. To see if he does, you’ll just have to watch the movie.

Released in 1998 and made for a relatively modest budget of $12 million, Rounders received only a moderate reaction from reviewers but with the increasing popularity of Texas Hold’em, it’s gone on to be a cult classic, especially among poker aficionados.

There’s an all-star cast including Matt Damon, Edward Norton, John Malkovich and Martin Landau; and the action takes place in and around the world of the rounders – poker hustlers who move from city to city looking for big money games to play.

Damon plays law student Mike McDermott who has dreams of playing at the World Series of Poker, but whose plans are ruined when he suffers a heavy loss in a game against a Russian gangster Teddy “KGB” played by Malkovitch.

Vowing to give up on the game to concentrate on his studies, Damon is drawn back in as he tries to help a friend called Worm, who has recently been released from prison to repay a debt he owes to Teddy. In a very tense scene where it looks like all is lost, McDermott makes a key observation that undermines the Russian’s poker strategy with dramatic consequences.

When Daniel Craig made his very first appearance as Bond in this 2006 film, it was to be the start of a very successful series which would go on to eclipse even the $599 million that this took at the box office.

From the outset this was very much a Bond for the new millennium, more violent and ruthless than before, and as far from the Roger Moore version of the character as it was possible to be.

In the film, his key enemy is a terrorist-supporting banker called Le Chiffre [1], played by Mads Mikkelson and in the film’s most famous scene Bond takes him on in a high stakes game of poker, funded by $10 million worth of the Government’s money. Initially, Bond loses the money but is offered a lifeline by his old CIA friend Felix Leiter (Jeffrey Wright). Then, despite Le Chiffre’s attempts to poison him mid-game, Bond administers the antidote and goes on to scoop the $115 million pot with the best hand possible, a straight flush.

A Big Hand For The Little Lady

This is the only film in the list that takes place in that classic genre for the hard-drinking and smoking poker game, the Western. Released in 1966 and starring Henry Fonda, Jason Robards, Burgess Meredith and Joanne Woodward. It tells the story of a poor family Meredith (Fonda), Mary (Woodward) and their young son Jackie, played by Gerald Michanaud who are passing through Laredo on their way to starting a new life in San Antonio.

They stop over in the town and notice a high stakes poker game is going on. Meredith, a keen gambler, asks to be dealt in and, without telling Mary, bets their life savings. As he is about to lose everything, he collapses and Mary steps in to play his hand, even though she needs to have the rules explained to her first.

It seems like she has a natural talent for the game and goes on to win impressively, even earning the admiration of all her fellow players. However, all is not what it seems and the film ends with a genuinely unexpected twist. To find out just what it is, you’ll have to search out the movie for yourself – but we promise you won’t be disappointed…