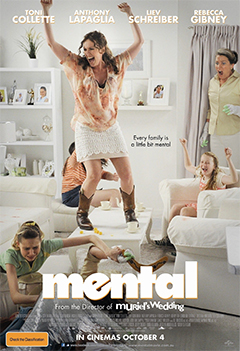 Opening with sweeping shots of scenery set to The Sound of Music‘s first number, leading the audience right now to a woman singing along and trying to keep her life together. Her daughters all seem to suffer from paranoia that they might have mental illnesses just like their mother, who often retreats into the fantasy world of the aforementioned musical. When she finally has a nervous breakdown, her politically inclined husband comes home with a nanny that’s more insane than all of them put together.

The only thing that’s more of a mess than the family we’re shown in Mental is probably Mental itself. Throwing a family of loons together into the care of another loon surrounded by people who think they’re all loons results in nothing but pure predictability. There are more than enough strange things that happen tossed into the plain narrative, but they don’t make it all that much better. There’s some weird shark related stuff, Lost in Space references, naked water-sliding  and loads of The Sound of Music musical numbers (of which I’m not complaining about because anyone who knows me knows I adore that film).

P.J. Hogan is a long way away from the good old days of My Best Friend’s Wedding here and it’s plain as day. Some part of him desperately wanted to make this movie be witty and insightful, but that part of him was smashed to bits by the loudness and craziness of the script he wrote. It doesn’t work as a comedy, it doesn’t work as a drama either. It’s just plain strange, and not in a good way.

While most of the cast is completely forgettable, Toni Collette as the insane nanny is clearly the most interesting one. She’s your usual character who turns everyone’s life upside down, and she comes along with her very own subplot that essentially becomes the film’s driving force in the latter half. In all honesty though, she isn’t that funny. Anyone who’s seen United States of Tara knows just how great Collette can be, but her work here isn’t all that good except for a few great key moments.

There are lots of things that could have gone into making Mental a good movie, but the amount of bad overwhelms that. At the very least, you can count how many times a completely wasted Sound of Music reference pops up.