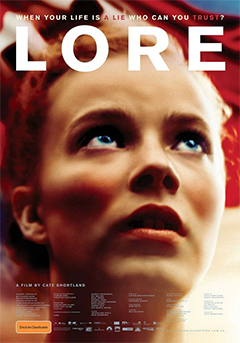 There’s an ever-present sense of urgency in Lore, even in its simplest, beautiful moments. Rather than present your usual World War 2 tale, Cate Shortland brings forth the point of view of Lore (Rosendahl), a young woman left to raise her siblings when her Nazi parents are imprisoned by the Allies.

Lore‘s lead actress, Saskia Rosendahl, is by far the most notable aspect. There’s no denying that the film is all about the title character’s journey, and the way she must shed everything to survive, both physically in material objects and emotionally in questioning what her parents brought her up to believe. Rosendahl is far more than a pretty face to present a glimpse at another side of the war, fleshing out the personality that writers Shortland and Robin Mukherjee bring out of Rachel Seiffert’s novel.

The story, at heart, is one of a woman coming of age. This is more often than not presented as a rebellious little phase in a teens life, but for Lore it is so much more. It is coming to the realization that maybe the Fuhrer wasn’t as wonderful as she was told. It is coming to terms with the fact that she can’t only rely on herself to survive. It is understanding that life is more than the politics of the world and that desperation can be your worst enemy.

Her journey is pushed along by Thomas (Malina), a Jewish man recently released from a concentration camp. In the midst of trying to get by and her family alive, even with Thomas’ help, Lore also faces the challenges that come with a budding sexuality. She looks from afar as she sees women being touched by men, a certain longing in her eyes along with some fear. The power of her sexuality dawns on her, as both those feelings of longing and fear lead her to experiences that would leave a scar on the strongest of minds.

Never needing an abundance of dialogue, Lore relies on using its visuals to say what needs to be told. There’s a strange, unsettling beauty in some of the raw images presented here, even when the camera cuts close to insects that crawl on the dead. The harshness of living in post-war Eruope is on exposition, and it’s practically shown through Lore’s own eyes. The audience experiences the same sort of disgust she sees in the beautiful, as well as the danger that lies in being surrounded by unfamiliar war-torn nature.

Lore presents a messy little world, full of confusion and conflicting emotions, but it reflects the state of the woman within. There’s terror, beauty, death, and even hope, in each beautiful frame, that proves that Cate Shortland’s film is a study of character that impresses.