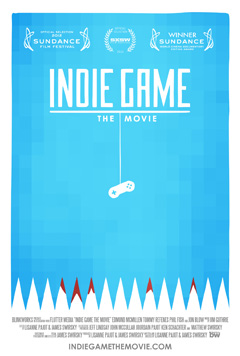 There’s a whole generation of people who have grown up with video games. Over the course of the years, a gamer culture was developed — I once took a “story for game design” class, but I never really took to it.

However, even a gaming-impaired idiot like me was aware of the independent games talked about in this documentary — especially Fez — which follows game designers who decided to not be part of the big gaming companies (like EA) in order to put their games out there.

Indie Game: The Movie is not really a documentary about the independent game industry, but a documentary about some of these individuals, how differently they deal with the stress of developing their games as well as industry reviews and public response. It’s also about the sacrifice of starting something from scratch.

And, okay, I have a soft spot for Canadian productions.

Indie Game is quite an engaging tale of people that gave up a LOT for years and years of non-paid work to make their ideas into something tangible. I think it’s that aspect of the film that is the most relatable to general audiences, presented in a really clear and straightforward and quite stylish way — after all, we do live in a world with glossy Vimeo videos.

Even though the documentary is about the sacrifice these people make, it does get grating at times. Some people see their jobs as just a means to make ends meet, it doesn’t matter if they have to do something else for a living, they will just go on and find something else. To McMillen and Refenes (Super Meat Boy), Blow (Braid), and especially Fish (Fez), creating games is all they want to do. Fish goes as far as saying that if his game had failed, he would go as far as to kill himself. Some people might just roll their eyes at him, just like we roll our eyes to over-dramatic suffering souls.

The film is very clear on what it really wants to tell, so I wasn’t that concerned about the issue with Fish’s ex-business partner, who created a bit of tension by the end of the film, but apparently there’s been conflicting reports, some saying he didn’t want to be part of the film while he says that the filmmakers didn’t ask him to be part of Indie Game. So even though his side of the story wasn’t essential for the film, there’s an unethical, problematic note in the credits that’s hard to get over.

The documentary has several ways of streaming with an array of subtitles available, so head over to their website at IndieGameTheMovie.com — Go, geeks and technology!