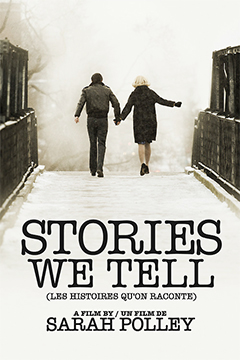 After delivering a gem like Take This Waltz, director Sarah Polley has taken her camera and flipped it on herself to explore her family. Stories We Tell begins by presenting us Polley and all her interviewees in the most casual of ways. There’s no strict wall between filmmaker and subject because there doesn’t need to be one. They’re all family and friends and she wants us to feel as though the intimacy of the documentary is genuine.

It is through each of these people that we are introduced to her mother, Diane Elizabeth. Every story that is told about the actress/casting director paints her to be this wonderful ball of energy and joy, always smiling and making everyone laugh, even when she’s just as much of a mess as Lucille Ball on I Love Lucy.

Michael, Diane’s husband and the man who raised Polley from birth, speaks of the first time they met and a few of their acting performances, only to go on about how their relationship changed over the years, for better or worse. The candid way that Michael reads from his memoirs detailing every little thing he can remember up until her death from cancer is fascinatingly candid and something to be appreciated in a documentary this personal.

For all the building up of Diane the documentary’s first act does, it is soon revealed that there is far more at play than just a family reminiscing on the past. Making for as harsh of a revelation to the audience as it must have been to Polley herself, the bomb that the man who raised her was not her biological father and that she was the product of an extramarital affair is dropped on us. This is accompanied by the family retelling jokes they used to make about Sarah looking nothing like Michael and the distressing knowledge that her parents almost decided to have an abortion for multiple reasons. It is here that the film kicks off into its most interesting moments as Polley makes the journey into discovering and meeting her biological father.

The way Polley frames the documentary makes it feel a bit more like a narrative feature at times, even playing with an almost Mamma Mia vibe when she attempts to discover who her mother had an affair with. A mix of interviews, some film footage, and Super-8 video shot to look like home movies gives Stories We Tell an especially distinct style.  The non-traditional way she puts the documentary together is both a help and a hindrance however, as it toys with false endings almost a bit too much.

Once Sarah discovers who her father is, meets him, and feels a genuine acceptance for the situation, it’s hard to keep momentum rolling as she discusses how unsure she was of every revealing these secrets to anyone else. When you’re sitting in the theater watching her reveal the secrets she was so nervous to tell, it defeats the purpose of having an abundance of material discussing how worried she was that someone might reveal them.

Even though the last act of Stories We Tell could have used its fair share of trimming, one must appreciate the candid nature of the story that Sarah Polley tells. While there’s no official truth declared by the end of the film, this amalgam of what people believe tells a tale that might just be better than the truth.