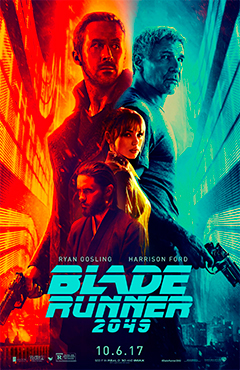 Blade Runner 2049 is the sequel to Ridley Scott’s cult classic Blade Runner. And since I promised I wouldn’t spoil plot points, here’s the synopsis that was in Wikipedia before it was updated and spoilery:

Officer K, a new blade runner for the Los Angeles Police Department, unearths a long-buried secret that has the potential to plunge what’s left of society into chaos. His discovery leads him on an epic quest to find Rick Deckard, a former blade runner who’s been missing for the last 30 years.

First off, let me say this was one beautiful movie. The most beautiful movie I have seen this year so far. No wonder Roger Deakins has been nominated 13 times for the Academy Award for Best Cinematography. And this one should easily be the 14th. The set design and world-building are amazing at recreating and updating the world of the original film. The city is cold, dirty and over-populated, but it is also damn lonely and depressing.

Another amazing aspect of the film is its soundtrack. Hans Zimmer and Benjamin Wallfisch created music full of high-tension and suspense, that actually enhanced both the dialogue and the action scenes.

As for the acting, Ryan Gosling carries the movie beautifully. Which is great, because we spend most of the movie with him. It’s an (slow-paced) emotional ride for him and for us. The ladies are all amazing. Robin Wright gives great energy to whatever scene she’s in. Sylvia Hoeks is full of contained rage. Ana de Armas is both adorable and a bit sad, and her character’s addition to the film was very creative. Harrison Ford was good with what he had, and was a good evolution for his character. In fact, everybody does great work, even if I feel the praise Jared Leto got from Villeneuve was over the top. Dude was “just fine”.

But boy, is this sci-fi film noir long. Almost three hours long! And yes, the pacing is slow, since they take their sweet time unraveling its main theme of what it means to be human.

Besides that, the film only has a couple of flaws. One is that it talks down to the audience a tiny bit in order to show their “revelations”. It was unnecessary unless they thought the audience wasn’t capable of paying attention. The other one is that pesky female objectification. Where’s my boyfriend experience, Wallace!

In conclusion, Blade Runner 2049 is a long beautiful movie that doesn’t betray its origins and still manages to be self-contained. Yes, the running time could be shorter, but I watched it in an average screen and it was still damn beautiful.