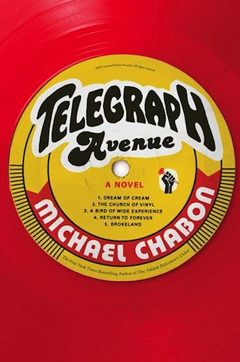 “Wait, I have to get real and take shit seriously?” Nat said. “At the same time?”

Brokeland: the nickname for a chunk of land sprawled around the Oakland-Berkeley border, a name shared by a used record store operated by Archy Stallings and Nat Jaffe. It’s 2004 in the Temescal district, and a local celebrity has decided that he’ll “return to his roots” by opening another branch of his mega chain entertainment store in the neighborhood. That opening would effectively shut down Brokeland. Should Nat and Archy fight the power? Who will help them?

It took twenty pages for Telegraph Avenue to capture my interest. Chabon has an excellent way of introducing characters, yet it was only with a scene at a card collector’s stall that these jaunts of description threw down the first anchor of humor-tinged pathos. All the adult characters are concerned with maintaining teetering enterprises. Archy’s grindhouse star father is finally drug-free and scrounging around old contacts to finance his dream movie. Gwen Shanks and Aviva Roth-Jaffe, Nat’s and Archy’s wives, respectively, are professional midwives. Gwen in particular is facing doubts about her life’s work, since she had set out to help fellow African-American women with traditional birth methods, but has rarely seen another non-white face in the office.

Having only read the younger readers adventure Summerland out of Chabon’s works so far, I can’t compare this book to The Adventures of Kavalier and Clay or his other well-known novels. Yet being familiar with the Berkeley-Oakland area that Telegraph runs through, I have to say that Chabon definitely wrote the setting right. His depiction of the the tastes, the complaints, the skies, the overlapping ethnicities and languages of the area was so evocative that I could just imagine the network of telephone wires over my head. Characterization is written through endless reference, but some minutiae don’t pass the filter, even within the limited view of the character in focus at a time. There’s one crack about Filipino pianos that’s most puzzling to me, and the sudden appearance of an Illinois senator who would later become president is an odd insert at best and straining liberal white sentiment at worst.

Controversy has arisen over Chabon writing in the voices of several African-American characters. For my lighter-skinned Latinasian Bay Area perspective, he has the characters down overall as products of their region. However, there’s a tension between embarrassment at some white characters’ attempts at “acting Black” and their constant attempts at proving one’s political correctness. Nat Jaffe knows how to cook fried chicken because he was raised in an African-American household?! Other readers might find this insulting, though there’s plenty of drama and comedy that arises effectively from the racial and socio-economic tensions.

One question I kept asking myself: do all these characters have similar reference pools? Nearly everyone seems to have watched the same cult movies and read the same books. It’s understandable for a used record store to pile on the more obscure music references and for the film-loving teens Julius Jaffe and Titus Joyner to study Quentin Tarantino’s film influences, but once again some believability is strained.

Also, for a novel set in 2004, modern anachronisms like a person saying “lawyer up” (popularized through 2010’s The Social Network) can stop the prose when the reader wonders, “Did people even say that back then?”

Telegraph Avenue is an “intimate epic” in four parts: Dream of Cream, The Church of Vinyl, A Bird of Wide Experience (a twelve-page sentence from a parrot’s point-of-view), Return to Forever, and ultimately Brokeland. Local politics and the past, death and birth, responsibility and pride and identity are handled with skillful crescendo and dimuendo. It’s unfortunate that the ending is abrupt in comparison, seeming satisfactory when read but unsatisfactory in hindsight. As a whole the novel is a fair and hilarious portrayal of the East Bay of Northern California, complete with peoples’ facepalm pitfalls and joy in private successes.