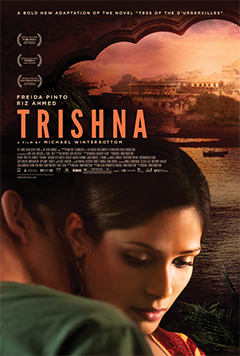 With the success of Danny Boyle’s Slumdog Millionaire, more white male filmmakers are determined to explore a budding fascination by exotifying Indian men and women through the country and its culture. John Madden’s recent exploration, The Best Exotic Marigold Hotel, fell flatter than one would have desired, but in comes Michael Winterbottom with Trishna, his modernization of Thomas Hardy’s novel Tess of the d’Urbervilles.

Setting his adaptation in contemporary India rather than Wessex in the late 19th century, Winterbottom introduces us to the titular character Trishna (Pinto), the eldest daughter of a poor family. While working to help pay the bills, she meets a young wealthy businessman, Jay Singh (Ahmed), who is preparing to manage his father’s hotel in India.

When Trishna and her father are injured in a car accident, Jay offers Trishna a well-paying career at the hotel. She hesitantly accepts, and it does not take long for their relationship to change into something romantic. It is only when she leaves behind a traditional life with her family to move with her lover to Mumbai that her life takes a drastic change.

For most American audiences, it is a pleasure to see a film that lingers on the beauty of a foreign country, and Winterbottom offers a vibrant, yet very limited, view of India through Trishna. The brilliant blues, purples and greens of the costume design bring out the life in the beige city of Jaipur, providing just as much of a stark contrast as the constricting white hotel garbs do against Pinto’s skin. The camera rarely stands still, constantly changing angles and pace, almost as though it’s trying to keep up with all the movement in India.

Still, one can only linger so long on something before getting tired of this two-hour film. Certain scenes drag; others, accompanied by the modern Indian music that the film loves to flaunt, are rushed. Blame poor screenwriting on Winterbottom’s mess. Trishna’s limited English at the start of the film is quickly done away with as the woman suddenly speaks fluently. Jay’s attempts to reference American films, particularly Howard Hawks’ To Have and Have Not, feel painfully out of place, as do his constant mood swings. Yet these minor inconsistencies are nothing compared to how the lazy script devolves from a character study of a conflicted woman into a cold and bland secret relationship that revolves around nothing but sex.

Pinto’s work on Slumdog Millionaire may not have been much to watch, but it is clear to see she has matured and trained for the role of Trishna. Her dramatic performance as this conflicted woman, a precious caged bird to the man she barely knows, is impressive. She runs circles around her costar Riz Ahmed, who delivers a shameful performance after great work in Four Lions. Even when the film declines into a series of aimless sex scenes in the latter half, Pinto never falters. Had Winterbottom chosen to focus on Trishna’s emotional growth rather than the same needless mistreatment of women that bogged down The Killer Inside Me, this would be a major success instead of the uneven film it is.