McDull: The Pork of Music 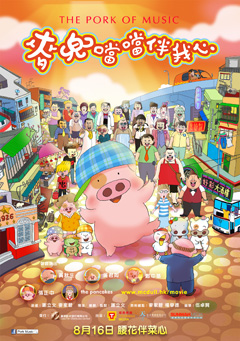 My story with the McDull series is an interesting one in that I ran into it almost by chance. As an animated piece, it seems to lack the grandiose settings of fantastical Japanese tales, the slickness of American animation, or the artiness of some European animated films. No, it seems McDull bases its uniqueness in its characters.

Unlike any of the aforementioned styles, the McDull series has its foundation on failure — a little piggy who’s neither good looking, madly bright or lucky… McDull’s only feature (and the most important one) is that he is a good-hearted piggy. Note: I doubt you need to watch the previous films (or follow the comic) to actually get The Pork of Music, but it would be an added bonus as familiarity with characters would add that tinge of melancholy that perfectly follows the mood of prior films like My Life as McDull or even Prince de la Bun.

In this fifth McDull film, McDull’s school (Chun Tian Hua Hua, or the Springfield Flower) is in trouble as its Headmaster (Wong) and Ms. Chan (The Pancakes) have been unable to make ends meet and pay the bills. The children’s lunches are getting reduced, their electricity is getting cut off, and the headmaster is pulling other part-time jobs to be able to stay afloat. One day, he has the bright idea of gathering former Chun Tian Hua Hua students for a fundraiser, but (as seen on McDull: The Alumni) former students aren’t exactly outstanding pillars of society. What’s left for the Headmaster? Only to get his students together, which besides McDull includes Goosie the goose, Fai the turtle, June the hippo, and May the cow, and turn them into a chorus of singing children, of course!

McDull: The Pork of Music might be the first McDull film not to center on the relationship between McDull and his mother, Mrs. McDull (Ng), who happens to get very little lines this time around. In that sense, the story loses a bit of the funnier aspect because Sandra Ng is so damn hilarious, and Mrs. McDull really is one of the brightest spots in all the series. However, it gives this movie a certain closure to the development of the Headmaster, giving it vibes of To Sir with Love.

Overall, though, I understand McDull may be an acquired taste in animation style or comedy — especially in The Pork of Music, which seemed to rely more on comparing inner feelings with crapping type of humor, as well as heavily musical sequences. Though previous films have had the children singing silly songs sporadically, this one has them going gig after gig singing songs about cars [1] set to Aram Khachaturian’s Sabre Dance [1], or being “your braised pork” [1] set to Pachelbel’s Canon in D [1], and the like. Who would have thought you could combine some bathroom humor with classical music, huh?