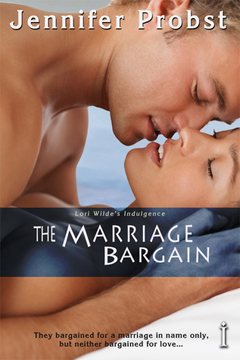 My love for romance never waivers, especially if one is written as well as The Marriage Bargain. I was instantly drawn to this by the title, I knew it was a contract-type relationship. I already knew the outcome since I watch a lot of Korean Dramas that have had this type of story line. No, it will never get old to me. I always look forward to the different types of characters that are written and the complications that follow.

For me, what I find intriguing are the impossible pairings that end up together. I believe opposites attract. I cheer for the pairing that never looked at each other until they needed something the most. With a contract signed on the dotted line, it’s always interesting to see how far characters will go and how long they’ll stay for what they thought they desired.

The story begins with Alexa McKenzie, a bookstore owner, and someone whose intelligence, I think, is a bit underestimated. She’s a great girl and very loyal to her family, which has provided her a moral upbringing. Out of desperation to try to help her family out of debt, Alexa casts a love spell in hopes of finding someone who has money. Unknowingly, the desperation in billionaire Nicholas Ryan, her best friend’s brother, comes into play. In order to obtain his uncle’s entire business there is one catch: he must be married for one year.

Everything seems perfect. Alexa sets her eyes on finally being able to pay the debt from her father’s heart surgery in full. For Nicholas this is a dream come true – no attachments of love or thoughts of children in the future. The added perk is Alexa and Nicholas grew up together, so it should be easy to get along with only minor teasing — things that they never really grew out of. However, while a little playfulness runs between them, things become heated quickly.

As Nicholas begins to realize Alexa isn’t a little girl anymore, the agreement of no sex outside the marriage begins to wear on them both. Temptation and sexual frustration play between the two like a fire gone out of control. Easy rules agreed on in their contract, like keeping the marriage business “friendly”, become harder to follow. Alexa and Nicholas start getting closer than they anticipated.

I read this book so many times that I’ve gone as far as tweeting Jennifer Probst on several occasions. The skillful writing of her work gave me detailed scenes that made me feel as if I was watching a movie instead of reading a book. The dialogue was swift and witty, clever even. She created characters so very different from each other that their interactions were always hilarious, ending in actual ‘lol’ moments. What draws me back is Nicholas Ryan. As my favorite character, I wanted to read about him in a world in which, even for a moment, he seemed so real.

With rules broken and hearts that were once frozen, it’s clear to see that sometimes the best laid plans can come easily undone.