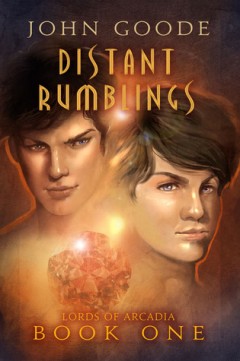 For a book to be great it should grab you from the first sentence. The voice should be heard instantly and this is what I got when reading Distant Rumblings. I wasn’t sure if I was going to be able to take part in a teenage boy’s journey, but because it’s such a well written book it wasn’t hard. We have a great character in Kane, the only boy in his small town in Athens, Iowa who is openly gay. He doesn’t have a hard time fitting in because in a dull town like Athens, everyone respects him.

Kane has a great sense of humor, but I don’t think he actually wants to come across as light hearted or slightly sarcastic. It’s his honesty that comes across differently: when he points out the weird names of the shops, his point of view of his small town, best friend and flutist  father has a voice of someone who just wants to escape.

As dull as Athens is, inwardly he wants change and he gets that when he first meets Hawk, a guy who Kane finds breathtakingly beautiful from first glance. With a strong attraction from the moment Kane sees the new student he immediately tries to find out who this guy is. When Kane gets up enough courage to track this silent student down he instantly meets trouble. Each turn he takes the boy is gone from his view; if he blinks it’s as if magic is in play, with the sudden disappearance of the stranger Kane wishes to know more about.

Their first meeting ends up in confusion for Kane, as he learns Hawk isn’t quite as normal as he looks.  Hawk quickly comes to understand the human realm is more than just escape from  his home. With Kane helping him, Hawk learns the different customs of Earth and life. Being a Prince of a different realm and fighting the darkness, Hawk’s attraction to Kane can’t get in the way, but it’s hard to fight it when it becomes the only thing he can hold on to.

Hawk is accompanied by his bodyguard and a changling named Spike. Spike slowly becomes jealous of Kane. Watching his master and a lowly human boy grow closer creates a darkness in the once loyal companion. As Hawk and Kane grow closer, the heart that once wanted to protect Hawk turns to hatred.

With a talking ruby, magic and theater outfits attacking, I found Distant Rumblings to be the best read of my summer. It has been a great source of entertainment, learning of different realms than our own.  This book is something you should read twice to get all the feelings from the characters. I feel the way the book was written from Kane’s point of view worked well with fluidity. As the point of view went back and forth between Kane and Hawk, it’s easy to grasp how they become excited yet confused coming to terms with their attraction. It’s fast paced with a great character who tells us his story of loving another boy with all of his heart. The characters touch your heart with a bit of magic and give you insight into what it is like to be a teenager in a small town feeling completely different.