The Journey of a Cassie Part Three – Pairings and Fan Fiction

Hello, my Cassie darlings. Now, admittedly I haven’t given anymore insight about my ride on the crazy train that is DBSK Fandom since my epic purging of my one-way ticket to obsession [1]. However, YAM’s 2012 LGBT Blogathon seemed like the perfect place to pick it up again.

A big part of my love of the boys has to do with their chemistry. The way they move around each other, so easily and so very comfortably. You can feel how much they care about each other without them having to scream, “I love you sooooo much *smooches*” every 15 seconds.

But, of course, that doesn’t stop them from showing their affection. Well, at the very least, four of the five of them. In particular, Yoochun and Junsu’s interactions and Jaejoong and Yunho’s interactions toe the line between fan service and overt affection — some would argue that the latter relationship errs on the side of being a bit obvious [see what I mean]. 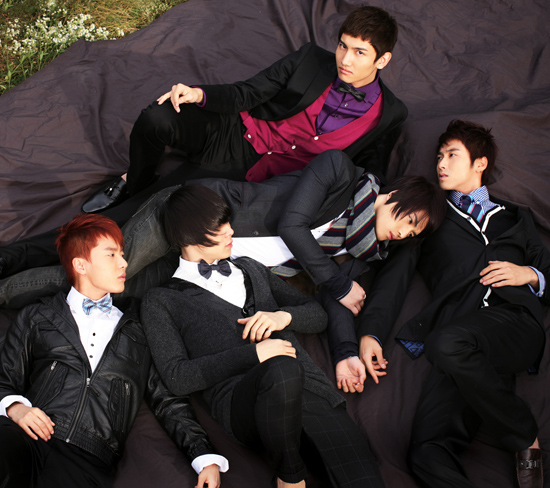 As such, many slash writers have taken it upon themselves to give their ideas (or fantasies, however you choose to call an obsession an obsession) credence through their own brand of fiction. What we see on stage and in interviews between the boys is enough material to keep fans raising their eyebrows in curiosity. What we don’t see, however, is what keeps many a fangirl tittering amongst themselves about the possibilities of their relationships.

The most obvious, and by default most popular, pairings are YunJae (Yunho and Jaejoong) and YooSu (Yoochun and Junsu). However, as with the now famous Couple Talks that the boys have had [for example], the combinations of their pairings are broad and, to some, rather interesting. The intricacies of the relationship among all the boys provides writers with an opportunity to bring a little bit of their creativity to the fandom and fan the already flickering flame stemming from the way these boys interact.