The Fangirly Diary of a Geek Girl: Picture Perfect

Greetings, fellow fangirls and fanboys! This week we had many casting news and announcements, but most awesome news are the many picture reveals of awaited superhero productions! So yes, lots of pretty pictures for us. Anyway, here’s how the week started.

Yep, James Gunn has totally confirmed that Karen Gillan will be back for Guardians Of The Galaxy 2. Yay for more Nebula! And I hope more for her relationship with Zoe Saldana’s Gamora.

Remember how Rogue basically got cut off of X-Men: Days Of Future Past and we were promised a DVD/Blu-ray longer version with these scenes included? Well, seems the “Rogue Cut” (get it?!) will be “more than 17 minutes longer than the original cut”, according to Bryan Singer himself!

George R.R. Martin plans (hopes, really) to finish The Winds of Winter by 2016. I also hope so, but wouldn’t hold my breath. Also, we are getting a twist! Maybe. The thing about the twist is that it might not be possibly done in the TV series! I hope he does it, actually. Whatever it is~

I’m still weighing whether to go that direction or not. It’s a great twist. It’s easy to do things that are shocking or unexpected, but they have to grow out of characters […] But it’s nothing I’ve ever thought of before. And it’s nothing they can do in the show, because the show has already—on this particular character—made a couple decisions that will preclude it, where in my case I have not made those decisions.

Furious 7 had a great debut with record breaking box office of $143 million! It’s not only the biggest opening weekend for any movie of the franchise but it also ranked ninth among the top 10 openings in history! Congrats!

Sadly, the other interesting news that day wasn’t that good. David Lynch has left the Twin Peaks revival, and everything sucks! According to Lynch himself on his twitter it was because “not enough money was offered to do the script the way I felt it needed to be done”. Showtime is now running around like a headless chicken… I mean, trying to resolve this setback and issued this statement:

We were saddened to read David Lynch’s statement today since we believed we were working towards solutions with David and his reps on the few remaining deal points. Showtime also loves the world of Twin Peaks and we continue to hold out hope that we can bring it back in all its glory with both of its extraordinary creators, David Lynch and Mark Frost, at its helm.

We saw the Deadpool suit in a funny pic shown by Ryan Reynolds as well as in the Deadpool April’s Fool joke; but here’s how it looks in action! Film set action! Yep, it actually look great. I image the white dots on the mask mean the “eyes of the mask” will be animated. 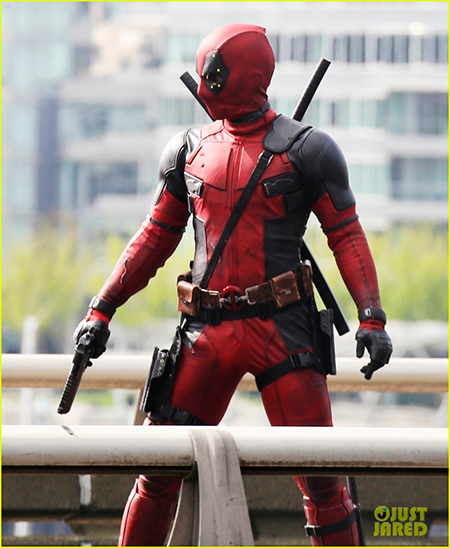 As we await the new Star Wars: The Force Awakens trailer, here is a list of some possible things we will watch, including Han Solo, Princess Leia, R2-D2 and C-3PO~

Yay! Doctor Who got renewed until 2020! And Steven Moffat will stay until then. Oh well. Here are Moffat’s words for Doctor Who Magazine:

Getting ready for the premiere of Game of Thrones Season 5, here’s a bunch on interviews with the cast and crew, where we can see, among other things, Sophie Turner talking about the road of Sansa becoming a hidden HBIC~

It’s definitely a dark season for her. She just escaped King’s Landing, and she goes back to a place where she becomes somewhat of a prisoner again. Despite being a prisoner again, she plays it out very differently this time compared to before. She tries to take command and begins to manipulate the people who are keeping her prisoner—which is nice.

You know those fake sequels in the end credits of 22 Jump Street? Well, here’s another news from WonderCon 2015, the producers of Jump Street 23 will somehow make those canon!

We’ve found a way that we love that makes those imagined sequels canonical and yet does something that we haven’t told you about yet. The sequels are canon.