SHINee – Married to the Music 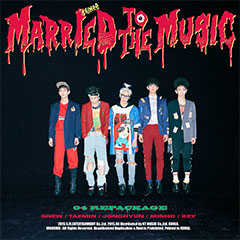 After the absolute awe of Odd, one of the best pop albums of 2015, SHINee decided to drop a repackage, perhaps to reap some of the awards and attention it’s predecessor failed to. Married to the Music adds a bit more sugar, and certainly more spice, to an album that already broke the K-pop mold when it released in May of this year. With its expanded tracklist, Julyssa and I decided to team up to give our impressions.

Julyssa: Since the release of this album, I have been playing it nonstop. Am I obsessed? Most probably. What about you?

Camiele: There have been two albums I’ve gone back to this year. One of them is Odd. Without a doubt, it’s one of the most complete albums I’ve heard in sound, concept, and experimentation.

J: I almost want to say it’s perfect from start to end. Considering I’ve been listening to SHINee since they debuted, this album is like a cherry on top of a huge and amazing sundae. When I heard View all I could do was throw my fists in the air and jump of joy. It’s a more mature sound, it’s sexy, it’s everything I wanted from SHINee and then some.

C: Without question, I’d say it’s the best K-pop album in the last five or six years. There’s more here than just what people “expect” from SHINee. If people had paid attention to the album for music’s sake, I think it would have gotten a bit more attention.

I didn’t initially jump in headfirst when I heard View. I was pleasantly surprised they used authentic London House, but being a House head, I wasn’t blown away. It’s on the lighter side of the genre, not faux-House, but certainly not Miguel Migs. However, when I first heard Odd Eye I thought to myself, “Okay. Here we go…”

J: As a fan I am so happy with what this album is. The only negative thing I have to say are the ballads aren’t really working compared to the rest of the album. But things got better when they released Married To The Music as the lead single for this repackage I thought, “Yes SHINee, you make it so easy to love you!”

C: SHINee will always be good at ballads. Their voices and the way they blend almost dictates any vocal-heavy song will turn out beautiful. It’s not so much the ballads, particularly An Ode to You, weren’t good. It’s more for an album that pushes the genre past certain tropes, sticking a couple typical OST-style ballads in is an odd (no pun intended) choice.

However, the midtempo tracks on this album were divine. Alive really is a perfectly constructed song, making use of the nuances of pop and R&B and blending them with the simplicity of the vocals. Then the end of the chorus gives us a harmony that wraps so tightly around that melody it just… hurts, it’s so damn good. The song is so musical, composed to fully explore the group’s level of musicality. I just drowned in it!

J: I guess that’s SHINee’s strength: their ability to handle any genre and make it their own. I can listen to a track and think, “This is a SHINee track.” They have a distinct musical ID that is easy to recognize but doesn’t get boring.

Considering where they started, the music has grown with them. I was already excited when they released Dream Girl because you knew this was the intro to a new, more mature, more experimental sound. In that aspect, their art team has done a great job in being patient in how they have developed the group, in terms of fashion and sound. It’s nothing less than a masterpiece.

C: Odd pushed their creativity to a level that I not only didn’t expect from an idol group, I didn’t expect in K-pop. What I actually love most about this entire endeavor is the fact they were given that chance, the chance to tackle songs, compositions, and vocal arrangements that were so experimental, that did force listeners to perhaps reconsider what K-pop is capable of. From the very first track, the album is making brilliant use of musical subtlety to both highlight the group’s vocal abilities and their overall artistry. Odd is the culmination of a surprising level of creative freedom and growth SM has bestowed upon SHINee since 2013. They’ve given them material (and allowed them to create their own) that will continue to allow them to grow as artists.

J: So it’s safe to say that SHINee is one of, if not the best, K-pop groups right now and that this album is pure perfection, and whoever is not listening to it is missing out big time?

C: I think if we’re just talking from a purely musical standpoint, it’s almost no contest. Especially in the “idol” industry, no other group compares. There will be groups that are more popular. But if you take the music, which is really all I care about, you’ll find SHINee really stands alone in an industry where music is second to concept, where it’s very much style over substance. Odd proved they had both the vocal chops and the musical direction to be in the industry for a very long time.