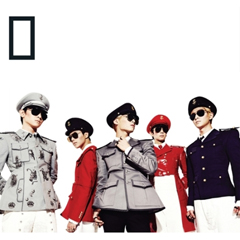 SHINee is in that weird in-between space of being simply good and being on the cusp of something legendary. Their images conceptually aren’t always very “smart”; however, they’ve got something that many groups following in their footsteps seem to lack: undeniably raw and exceptional vocal talent.

Everybody can really be summed up pretty quickly for me: Symptoms. The song, penned by one of the group’s biggest singers, Jonghyun, is a marvel. The concept is simple; however, the lyrics are mature and surprisingly intelligent. The extended metaphor of a sickness is quite clever.  She’s both the source of his affliction as well as the cure: “The only medicine is you.” Of course, the composition is what grabs you as soon as the track begins. It’s hard R&B, raw and emotional, a song that reaches right into the soul. Legendary production team the Underdogs (whose work includes Mary J. Blige, Dru Hill, Donell Jones, and R. Kelly) stepped in to give this song that heavy-beating slow-jam effect, and the result is just mind-blowing. Painting Jonghyun’s lyrics with this sexy liquid R&B was utter genius.

Barring the title track, Everybody is a very mature piece of work. The mini incorporates strong R&B elements with more accessible pop, which manages to avoid overshadowing the overall largeness of some of the music. One Minute Back is a complex track that’s sultry and soulful, but takes a daring chance with the traditional R&B landscape to include broken beats and layered vocals, an aspect very reminiscent of some of the best R&B to come at the tail-end of the 90s. For its part, title track Everybody is typical, run-of-the-mill SHINee, the likes of which we’ve heard at least once on every album since Lucifer. Colorful — again, a typical Kpop song that pretty much would fit on any album from any group. Queen of New York has a bit of a disco feel, which is unexpected, but mostly succeeds in being rather cheesy.

Yet again, the boys highlight their incredible vocal abilities. Of course, the standouts will always be Onew and Jonghyun, the depth and arc of their voices are immediately shocking and always impress. However, Taemin has vastly improved his vocal prowess and can at times match pace with Jonghyun in certain moments when you’re least expecting it (Everybody, Destination). Even the obligatory rapping, which for the most part I loathe, is stronger, sharper, and seems to have more of an impact (perhaps because Everybody is a minialbum and there’s more of a need to make everything count).

What makes Everybody original is the depth of the compositions and the pleasantly surprising experimentation with more traditional R&B. It’s sort of a stepping stone to more recognizably mature work, but holds tight to the same constructs that have prevailed in the Kpop world for almost a decade.

Strandout Tracks: Symptoms, One Minute Back, Close the Door

You can listen to Everybody on Xiami and Spotify. You can buy the album on iTunes, Synnara, YesAsia, DVD Heaven, and KpopTown.