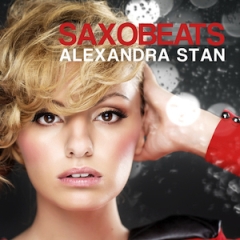 Wanna know how I ended up listening to Alexandra Stan’s debut album, Saxobeats? One day, I heard Mr. Saxobeat by accident and I was instantly hooked. Thanks to its insanely catchy saxophone riffs and Stan’s voice, Mr. Saxobeat is a very fun, upbeat song that you can smile and dance to no matter where you are. Plus, the song works like a charm for parties.

However, listening to the rest of the album’s tracks was frustrating. Ting-Ting is a good follow-up to Mr. Saxobeat and has a French vibe to it, but the rest of the tracks follow the same structure and feel of Stan’s worldwide hit song, rendering Saxobeats almost devoid of creativity. One Million, featuring Zimbabwean/German rapper Carlpitt, stands out for sounding different than the rest of the tracks. It is an R&B-pop song, and Stan expresses herself well in the genre. But the remixes featured on Saxobeats don’t do much to enhance the album.

Alexandra Stan has room for improvement. She’s got a good voice and under the right direction, she could be better. The success of Mr. Saxobeat obviously worked against her — I guess the producers assumed people wanted to hear more of the same. However, making your debut with a repetitive album isn’t a good thing.

Preview it on Xiami | Like it? Buy it on Amazon or iTunes