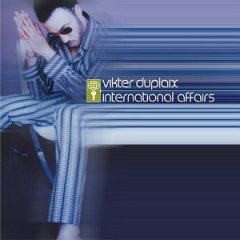 The prince of Electro Soul gave us a sensory overload with his début, International Affairs. This is Duplaix at probably his most naturally sensual, as sounds and landscapes drip from each track.

International Affairs gives listeners the opportunity to peek into his musical philosophy, his understanding of how the body and mind react to certain stimuli. It showcases the lushness of Duplaix’s production quality. He understands the weight of the music and the way it leans on his lyrics. With his writing, Duplaix has managed to give form and depth to the music.

More than an album, International Affairs is an experiment in mood. With songs like Lust for Life and I Got You, Duplaix shows his exuberance for life and the honesty of love. However, Desperately paints the ears in seasons. It combines the elements to give the body eternal sway, beginning in icy blue tones, burning through the walls and soothing those corners still in significant need of a lover’s balm.

Of course, Duplaix is a producer with the capacity to give cerebral height to his music. With opening track Departure, an Afro-Brazilian masterpiece, he forcefully elevates the palette of the listener, forcing her to be open for the experiences buzzing beyond a velvet rope. From there, beats invade the body, creating a dance floor of the raw material of the listener’s DNA.

Though his first, this was Duplaix’s most visceral album, acting as a precursor to the dance atmosphere of Singles: Prelude to the Future (2004) and the onslaught of stimulation that was Bold and Beautiful (2006).

Listen to the album on Xiami | Like it? Buy it at Amazon.