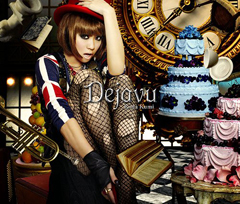 Let me just say, from the introduction of Dejavu, you’re already moved to dance and crave for more.  Love the beats!  The first two songs are packed with awesome club beats.  Pop Diva is super high energy clubbing music. I would crank my volume up in the car for it.  Then Lollipop sounds like a daring, power to the women kind of song.  From that point on the songs get slower in tempo, starting with Ok. It happens gradually and it’s a pleasant change, actually.  From the slow songs, Passing By is my favorite.  It’s a beautiful, melancholic song. Love the male vocals in there interacting with Kumi’s vocals. Very nice piece.

At the weekend kicks things into gear again. It’s a more powerful tune but doesn’t feel de-synthetized from the ballads that precede it. It feels like she’s moving from melancholy to anger. Then comes the Interlude. I love it because it’s eerie.  Unfortunately, what comes afterward is so happy-go-lucky.  The change was so radical. Regardless, the tunes after the interlude are also very good, just not quite as powerful as the first half. It’s a lot more like the Jpop we’re all used to, except that Kumi’s voice gives it an edgier sound.

My favorite song from the second half is Bambi.  It’s such an adorable, quick paced song with fun vocals. Sounds like the odd-one-out of the album, in a good way. It’s the one that will definitely stay stuck in your head the rest of the day.

Really with the cover art, the introduction and the first few songs I was expecting more of the power-pop, clubbing beats. The majority of the songs are pop-ballad but they’re all very good songs.

Preview on Xiami.com | Like it? Buy the album on YesAsia.com | CDJapan.com