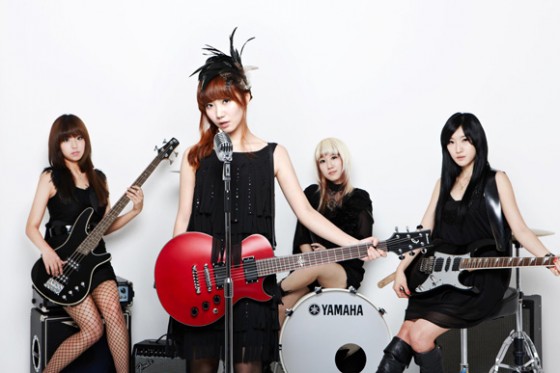 Seeing Korean rock band Jaurim’s take on the Brown Eyed Girls hit Abracadabra [1] has made me wonder just how much of an edgier undercurrent one can find to the current crop of girl groups in South Korea. Challenging the common perception of Korean & Asian pop in general being toothless and manufactured, pop rockers CNBlue [1]  are currently ruling the roost without once letting go of their guitars, nor breaking out into a dance routine on stage like other all-male peers would. Couple this with the rising profile of Korean indie, and the fact female-fronted rock bands like Jaurim and Cherry Filter [1] have been around for a good few years now, and it’s time for a look at if and how such background distortion is inspiring girls in Kpop to break the mold.

Jaurim covering Abracadabra is fitting for a few reasons. When released back in 2009, the original generated controversy with promo lipstick-Sapphic antics unheard of at the time in Korea, marking a change in image not just for pop group Brown Eyed Girls, but for the entire representation of sexuality in Kpop in general. Hark back to Madonna raunching up the disco scene in the 80s and you come close to how the video’s minimally stark mix of leather and gyration looked when compared to the usual chipper girls showing off their thighs in colorful hot pants. The track’s harsh electro worked much the same way, replacing bubblegum pop with no smiles and a lot more bite.

While a more nuanced increase in sexual suggestion doesn’t necessarily correlate to the backlash of grunge & punk, nor, say, the Beatles ditching Merseybeat, it’s still interesting nonetheless to see the ripple effect B.E.G. had in the palate of Kpop imagery. A few years later would find acts like Sunny Hill debuting with gothic sounds and imagery (see the darkly named Midnight Circus [MV]), and the rise of snotty teens 2NE1, whose every other release comes off titled like a playground taunt (I Don’t Care [MV], Hate You [MV], etc). The Wondergirls went a little electroclash on their last album too [1].

With each of these songs though, it’s hard to hear a move away from the dance floor destination intended by their producers. Even among the Burton burlesque of the Midnight Circus music video one will find a dance routine at the middle of it all. It still seems that we have to look to the Brown Eyed Girls for innovation in the field.