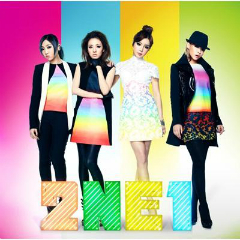 Scream is 2NE1’s first original Japanese single.  I must say, I love it when Korean pop groups make original Japanese songs for their Japanese activities instead of translating their Korean songs into Japanese. When they translate, the songs are, often times, extremely awkward. So I was very excited about Scream.

Out of all the 2NE1 releases in Japanese, this one makes the most sense. The song is catchy and displays a different side to 2NE1’s edgy personalities. Although the style is a bit on the girly side, it manages to keep that essential 2NE1 attitude. I also love how much more high fashion the sound is. The group has always incorporated electronic beats but this time around it just sounds very refined.

Even cooler than Scream is the m-flo Remix. I’m completely addicted to the remix. Play it and try not dancing to it. It’s impossible! There’s even a breakdown. Way too cool!

Lastly, there’s the Japanese version of their debut song Fire. I can only say about this the same as I’ve said before. There’s no need to make translations, they’re just awkward.