Plenty of critics and fans alike have been drawn to J.J. Abrams’ latest addition to the Star Trek series like a moth to a flame, and I just can’t wrap my head around why everyone is allowing themselves to be burned by a film of this sort. Even here on YAM, the review for Star Trek Into Darkness is rather positive, but it is something that I wholeheartedly disagree with.

There’s a certain elegance to crafting a great science fiction feature that is as interesting as it is entertaining. J.J. Abrams’ work on Star Trek with writers Roberto Orci and Alex Kurtzman was truly inspired, literally creating an alternate timeline to have their way with for the sake of giving people something new. With Star Trek Into Darkness, however, it’s almost like all that inspiration and elegance is out in space screaming for help where no one can hear. 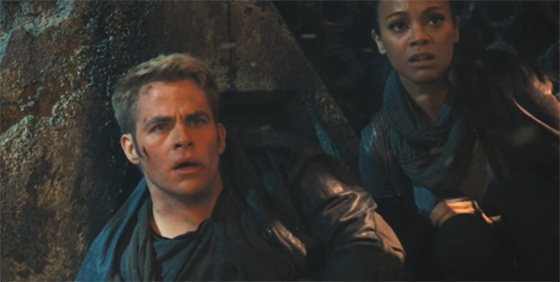 Kirk and Uhura are just as confused as you about why this movie was so disappointing.

Taking place after the events of the first film, Star Trek Into Darkness kicks off with the Enterprise crew facing penalties for breaking protocol. This is only pushed aside when a new threat from inside of Star Fleet emerges, only to be revealed as none other than Khan Noonien Singh (Benedict Cumberbatch), from the original series and the series’ most popular film, The Wrath of Khan. Faced with the potential downfall of Star Fleet, Kirk (Chris Pine) and his crew must face off this new enemy, as well as other threats that rise along with him.

Those who do not know the name Khan will find themselves not quite as frustrated with the mediocre quality of the writing at work here, which tries as hard as it can to force its characters into as many negative situations as physically possible; A volcano, a broken engine, a superhuman, whatever. It’s all shoved together into an over two hour feature that doesn’t deserve its length. The addition of Lost co-creator Damon Lindelof to the writing team, whose track record has been less than pleasant lately, could be the big issue, but it could also be that the three writers couldn’t quite come up with anything new.

Star Trek Into Darkness uses its predecessors as crutches to make itself work. Where the first brought forth an effortless humor and action-packed revival, this second film longs to make a real emotional connection with the audience. What its writers don’t realize is that mirroring plot points and even exact shots from The Wrath of Khan doesn’t mean that it will have the same impact. This cast of colorful actors have only been around for one movie. All of them embrace their characters beautifully, especially Zachary Quinto and Chris Pine as Spock and Kirk, but people haven’t gotten to know them quite like they knew Leonard Nimoy and William Shatner after years upon years of watching a television series. On top of this, it’s impossible to not be underwhelmed by Benedict Cumberbatch’s decent performance when compared to the incredibly memorable and almost over the top work that Ricardo Montalban delivered as the same character decades ago. 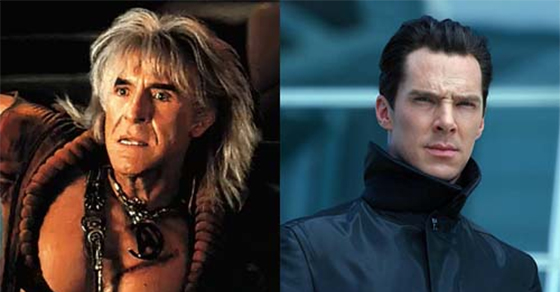 Was this a thing that was really necessary? He could have literally played any other character and the movie would have still been exactly as boring and slightly less offensive to my senses.

If there’s one thing that can always be praised in films of this nature, it’s the stunning look of things. The costumes, make-up, and set design never fail to place us right in this minimalist future full of big sleek buildings and strange people, even when the same sexist fanservice of the sixties series is still present, considering Alice Eve’s stripping in front of Kirk for no good reason. At the very least, every glorious special effect, from the warp speed to each explosion, makes for some entertaining action sequences that help fill up the film’s overlong length.

For all the beauty, there’s still that running joke about Abrams and his love for lens flare. It almost reaches a level of self-parody here, as there’s even one moment where the flare almost entirely covers up Zoe Saldana’s perfectly framed face for no particular reason. Abrams and his frequent director of photography Daniel Mindel should know better than to add frills where they’re not needed by now, rather than continuously enhancing this strange stylistic decision that rarely has substance.

Coming right after what could be considered one of the greatest reboots of a classic series, Star Trek Into Darkness has more flaws than it should. Just as Khan views these average human as inferior, so should an audience see this Khan rip-off in the same manner. One can only hope that Abrams and his writing team will bring back the qualities that made their first work such a great endeavor.