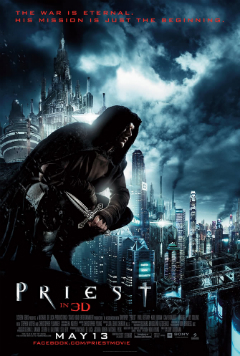 Although Priest promises plenty of action sequences and vampires that don’t sparkle in the sunlight, it has barely anything to offer other than that. Dialogue: unbearable. Pacing: too quick. Relation to the graphic novel: none.

Priestbegins with an animated sequence explaining a previous war between humans and vampires that led to the establishment of a totalitarian church system, as well as the emergence of the priests: men and women dedicated to fighting vampires and protecting humanity. The war eventually ends with humanity retreating into a dystopian city ruled by the church, while the priests must blend into society, vowing to never leave and fight again. When word arrives that his niece was kidnapped by vampires, the priest breaks his vows and leaves the city to find her. Along the way, his niece’s boyfriend – who happens to be sheriff of the wastelands – joins him in the fight against vampires, and they discover that the vampires have much greater plans than they expected.

It’s a wonder to me how Scott Stewart was able to get funding for this movie, especially after the train wreck that was Legion – his first attempt at a sci-fi fantasy thriller (although this one seems to not know whether or not it wants to jump into the Western genre). It also leads many to wonder if Paul Bettany has become typecast as the serious religious figure after starring in The Da Vinci Code. Whether or not this is true, not even his talent as an actor could save him from the terrible script for this movie – the blame of which goes to Cory Goodman’s first time writing. Tagging alongside him is Gigandet, whose acting in this is almost painful to watch – as he tries to add a cocky smirk to every scene while attempting to look serious at the same time. The characters were poorly developed and appropriately named after their entire personality. For example: Paul Bettany is “Priest”, Karl Urban is “Black Hat” (surprise: he wears a black hat), and Maggie Q is “Priestess” due to her gender. Unfortunately for fans of the manga expecting something accurate; the film is a painfully loose adaptation that barely retains anything from the series.

You’d think that with a poor story and disappointing characters, Priestwould at least deliver fascinating action sequences, with plenty of the violence and gore that seemed inevitable from trailers. You’d be wrong. Slapped with a PG-13 rating, the fight sequences feel so improperly cut and anticlimactic that they’re actually laughable at some points. Plenty of praise should be given to the visual production and set design though – especially the cyberpunk inspired designs and even the post-apocalyptic western town. It’s obvious that plenty of work went towards the lighting and art direction as well, but it loses quality in 3D. You’re much better off watching this in 2D instead, as the action scenes weren’t designed for 3D and added in post-production, leaving a strain on the eyes for minor effects thanks to those extra shades of darkness.

If you’re an action junkie, you might just love Priest, but I have a feeling that will be a stretch even for some of the most dedicated fans. Most audiences, however, might just walk out and pray a rosary in thanks that the running time was only eighty-seven minutes.