Why I No Longer Care About Harry Potter

I was a second grader in 1999 when my Kindergarten teacher gave me the first three Harry Potter books as a gift. I remember this because I was in the car after being picked up from school and she handed the books to my mother through the window.

I was taken by them. I remember reading them multiple times over, just the first three. I had two copies of the first book and one of them had this really nifty gold paint on the edge of the pages. The book itself was green and leathery. It looked like one of the old books you saw in a doctor’s study.

After I had read the first three books, my mother realized that I liked them and began to buy the others as soon as they were released. I read the fourth, fifth, sixth, and seventh books shortly after I received them.

I actually carried the fourth book with me in my backpack for months in the fourth grade. Someone left a sticky fruit cup on the cover. I had taken the paper slip off and so the fruit cup left a ring that eventually gave way to the cardboard of the cover (all of my Harry Potter books were hardcover).

My favorite book ended up being the sixth because everyone was falling in love and the characters seemed to be more vulnerable and even the smartest ones seemed to be scared. By the time the seventh book rolled around, I was scared as well. I was afraid that the book would end up disappointing me and in a way it did. The ending seemed to be a cop out but I never let that bother me. I remained a fan.

Over the years the films came out and I put aside my attention to detail for a more accommodating suspension of disbelief. This sufficed and I went out and watched every film as it came out. I loved them for what they were and I appreciated the actors and I enjoyed seeing the pages come to life.

So what happened? The same thing that happens to a lot of really lovely things — the fans. 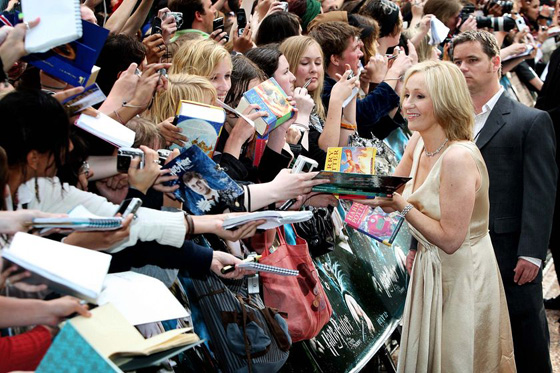