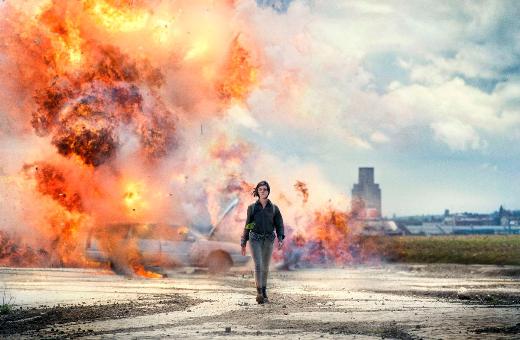 I’ve done so many terrible things, but what we are doing is right.

Utopia begins and ends in violence. In between, keep track of what you see and hear, for anything from the radio reporting high food prices to the numerous shots of nature could foreshadow something more sinister. Lives are sabotaged, bonds form and break under pressure, and characters find everything they knew about the world¾and about themselves¾shattered by revelation and paranoia.

Conflict strikes on two fronts. In one, the Russian mafia pushes a dubious vaccine into widespread use. On the other, a lost manuscript for the sequel of a cult graphic novel resurfaces, drawing the attention of those who will kill for answers to these questions: “Where is the manuscript?” “Where is Jessica Hyde?”

One may wonder how these serve as believable entry points into global conspiracy. Though a few plot holes remain uncovered, the propulsive force of the show is irresistible. What seem like stylistic excesses in the first episode become quite fitting as the show progresses. Scenes of torture and murder prove not to be empty shocks but the desperate actions of ruthless, often conflicted people.

Constant threat injects fear into the most mundane objects and backdrops, heightened by the hypersaturated look of the show. From bright yellow title cards and masterful color coordination to extraordinary graphic novel art and stunning landscapes, the visuals of Utopia are unlike those of any other program on television. Director of Photography Ole Bratt Birkeland frames gorgeous shots without pretense. Aided by direction and other production departments, these images astound while still falling into the show’s rhythm. Avant-garde electronic composer Cristobal Tapia de Veer provides memorable minimalist accompaniment (tracks can be heard at Soundcloud) with instruments like rhino dung and human bones [1]. Here’s the theme music for a taste.

The series’ global conspiracy is even scarier given its incorporation of coincidentally current topics, like school shootings and food product scandals. Occasional humor leavens the tension, and there are no weak points in the cast as characters unfurl and transform while trying to do what they think is right. IT employee Ian (Nathan Stewart-Jarrett, Misfits), grad student Becky (Alexandra Roach), once-untraceable techie Wilson Wilson (Four Lions), and twelve-year-olds Grant (Oliver Woolford) and Alice (Emilia Jones) must go on the run when their interest in the Utopia manuscript puts their lives in jeopardy. Department of Health employee Michael Dugdale (The Thick of It) finds himself a pawn of conspiracy, and mysterious agents Jessica Hyde (Fiona O’Shaughnessy) and Arby (Kill List) employ vicious methods in pursuit of their respective goals. Who can trust whom? For how long?

Humanity is at stake, within every featured character and of the population at large. Series creator Dennis Kelly said, “We may look at it and think that’s a grisly version of Utopia but for them, they’re oddly trying to improve things…Unfortunately their brains seem to take over their hearts and they do terrible things. [1]” Yet amidst the schemes and brutality and mistrust, the best scenes occur during moments of kindness. How each person chooses to express understanding and care for fellow human beings gives Utopia its signature complexity.