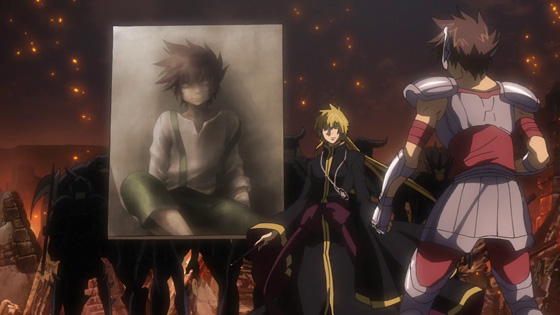 The Saint Seiya mangas and anime series may not be one of Japan’s most popular animes among the Japanese, but it is very famous outside its country of origin. Saint Seiya: The Lost Canvas – Myth of Hades (Original Title: 聖闘士星矢 THE LOST CANVAS 冥王神話) is the most recent addition to the Saint Seiya universe and tells the story of the previous Holy War that took place 250 years before the events of Saint Seiya: Knights of the Zodiac.

The Lost Canvas is centered on the relationship between Tenma, Sasha and Alone, who grew up in an orphanage and were best of friends. They drift away from each other when they grow up. Sasha departs towards the Sanctuary to become Athena, the goddess of war and justice; Tenma starts to train with Gold Saint Libra Dohko (Dragon Shiryū’s eventual mentor) to become the Pegasus Saint.

On the other hand, Alone’s fate is rather different. His body is chosen by Hades for his return — and start the Holy War — since Alone possesses the purest of souls on Earth. One of Alone’s talents includes being a very skilled painter. But everything he paints dies, which is useful to Hades in developing “The Lost Canvas”, a painting that once it is completed will destroy the world.

Visually, The Lost Canvas reminded me of Fullmetal Alchemist based on how the characters were drawn as well as the scenarios, but the costumes do stay true to the original source. The opening theme song (The Realm of Athena by EUROX) was entirely sung in English, which is something uncommon for Japanese animes and that may piss off some fans, but it didn’t anger me at all. A more noticeable aspect of The Lost Canvas is that comedy bits are included throughout the episodes, something rarely done in previous Saint Seiya media, but it was well executed. The villains are pretty much similar to the ones seen on the Hades Sanctuary OVAs, but with some tweaks.

And of course, it’s inevitable to compare the Pegasus Saints, Tenma and Seiya. Both are passionate fighters who would definitely kill for Athena, but Seiya is more like Goku (Dragon Ball) and Tenma is less of a lead character than Seiya, but he’s different since he’s more arrogant and has comedy bits worthy of characters seen in shows like Naruto, Ranma 1/2 and Fullmetal Alchemist.

The Lost Canvas is actually enjoyable to watch. The story is easy to understand and well paced for the most part. Some of the concepts and characters may seem familiar to diehard fans of the original series, but the changes added to them for this show are great. The animation looks pretty good and the action is more fluid — there is good focus on hand-to-hand combat in a few fights. Among the voice actors, Tetsuya Kakihara as Tenma/Pegasus works well as the lead character, but it is Hiro Shimono as Alone/Hades who stands out better. Shimono effectively switches his voice and tone to match the different personalities of his character. And the story isn’t just about Tenma. There’s also focus of other characters like some of the Gold Saints that get their own storylines, but they’re used in a way that contributes to the progression of the series.

All in all, a really strong representation of the Saint Seiya franchise on The Lost Canvas. If you liked the original series, give this one a shot.