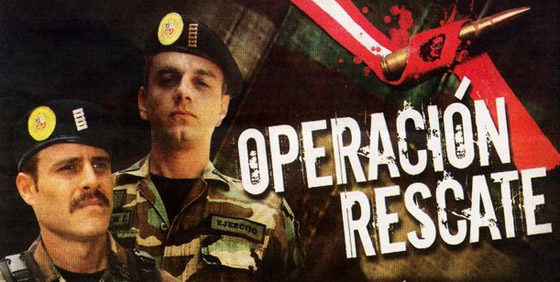 Operacion Rescate (Rescue Mission) is a series depicting the fateful events between the taking of the residence of the Japanese ambassador in Lima, Peru by the MRTA terrorists. The events lasted a well-documented 126 days, in which they tried to negotiate the release of key members of their group, the successful military operation to rescue the hostages, and the later events in which the commandos were prosecuted themselves.

Based on really dramatic events, one would think this would be “cinematic” gold, so it’s a surprise to find the little care that went into this project. While sitting through episodes of Rescate, we not only found poor production values that makes it all look like poor staging, but also subpar cinematography, amateur camera work, and poor casting choices – we wonder why actor Pedro Yufra played Japanese ambassador Morihisa Aoki in yellowface. There’s also dialogue that tells you what’s about to happen, and when it happens, they tell you it’s happened in case you looked away and missed it.

Instead of focusing on the actual military and government tactics, or making us feel like we’re hostages, which would create enough drama for a miniseries – even on HBO – the people in Rescate decide to bring in the “human factor” with the made up story of a group of journalists stationed outside the embassy, their entangled love lives, and their desire for breaking a story to get bigger ratings. Yeah, we didn’t care for any of the characters.