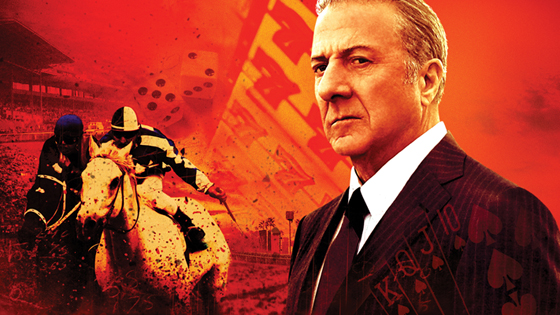 Shortly after Luck‘s pilot episode (directed by Michael Mann) aired, HBO renewed the show for a second season. However, after a third horse died during production of Season 2 — followed by PETA and other animal organizations criticizing Luck for the deaths — HBO had no other choice but to cancel the show.

Created by David Milch (Deadwood), Luck was a show that explored in detail the characters surrounding the Horse racing sport, which include mobsters, gamblers, trainers, jockeys and agents — all of them spending most of their time at the racetrack, taking care of the horses as well as their respective issues and buisnesses.

The show’s main character is Ace Bernstein (Dustin Hoffman), a mobster who is released from jail after serving a three-year prison sentence. Along with Gus (Dennis Farina), his long time friend and driver, Ace plans to take control of the Santa Anita racetrack in LA, while at the same time plotting his revenge against the ones he holds responsible for his sentence.

Simultaneously, Luck also follows a group of gamblers — Marcus (Kevin Dunn), Lonnie (Ian Hart), Renzo (Ritchie Coster) and Jerry (Jason Gedrick) — who end up becoming millionaries thanks to Jerry betting on the right horse. They end up purchasing the horse because of its talent. Not only do they have to deal with maintaining their horse appropiately, but they also have to deal with the temptaions that come from winning a large sum of money as well as Jerry’s poker addiction, which worsens as time passes by.

David Milch manages to get good performances from the entire cast through the dialogue and simple emotional gestures that speak louder than words. While most audiences would check out Luck because of Dustin Hoffman, I have to admit that the pack of gamblers are by far the show’s most interesting act — it’s endearing how much love they have for each other (and horse racing) throughout their storylines. Kerry Condon was delightful to watch as the female Irish jockey who is looking for her big breakout moment. Both John Ortiz and Nick Nolte tackle horse trainers Turo Escalante and Walter Smith, respectively. Escalante is a self-made trainer who excels at what he does, but also resorts to questionable tactics for his own good. On the other hand, Walter is a gritty-voiced trainer who is still trying to overcome the death of one of his horses. Ortiz is good and provides comic relief at times, but Nolte’s performance is gritty and gets even better during the second half of the season. The rest of the cast plays their parts well.

The horse racing scenes are of the highest quality you’ll ever see. Shot in HD, these scenes feel thrilling and exciting thanks to the main horses — Mon Gateau (gamblers), Pint of Pain (Ace) and Gettin’ Up Morning (Walter) — who also bring out the best of their respective owners. The final race is easily the greatest scene of the entire series thanks to how everything was built up before.

While Luck sounds great, the biggest problem is Ace’s storylines. They hardly seem interesting when compared to whatever the supporting characters are doing. First, Ace’s revenge plot isn’t all that exciting despite Hoffman’s acting. Second, Ace is inserted into a near pointless romance storyline with Claire (Joan Allen), who wants him to get into charity. Third, the bromance between Ace and Gus is either hit or miss. It isn’t until Mike (Michael Gambon), the main antagonist and one of the people who screwed Ace years ago, enters the show that Ace becomes interesting as he is put under pressure and feels threatened later on.

Luck isn’t easy to watch, as it’s jargon-heavy at first. The accents of Turo and Walter can be off-putting and the show appeals more towards horse racing fans (Milch and Mann included). But like all HBO shows, it takes a while to settle in. And if you get into Luck, it’s worth a watch thanks to the gamblers and the stunning horse racing scenes. Unfortunately, we’ll never know what could have been of Ace and Mike’s unresolved rivalry as well as the future of the supporting characters.