Life on Mars (BBC 1 2006-2007) was a brilliant show whose writers understood that great stories have a beginning, middle and definitive end. Most shows, especially those produced Stateside, tend to have such popular followings and continuous revenue streams that a show no longer becomes about the story so much as a franchise. That results in staid writing that struggles to lend any meaningful character development and retreads of previous ideas. Those that don’t enjoy such popularity aspire to achieve longevity by leaving storylines open ended. For some odd reason, producers think cliffhangers will make sponsors want to renew a show to see what happens.

This is due chiefly to the fact BBC 1 is funded by license fees for T.V. access rather than advertising sponsorship, so creators are definitely more in control in terms of content and where it will go. By contrast, if one watches the first season of Heroes as heavily funded by Nissan, Hiro Nakumura is constantly calling his car “the Nissan Versa” instead of “car” like normal people. If you’re like me, you never love your car enough to call it anything. Hell, I leave my car unlocked in the hopes it’ll be stolen and I can get the insurance money for it. I guess I would call it “orphan”.

All this is background for what makes Life on Mars as good as it was. It’s premise is very simple, the situations that arise therein quite complex. It weaves together a few different genres in what seems like a police procedural as interpreted through literary magical realism. Sam Tyler (John Simm) is a Detective Chief Inspector at the Hyde precinct of Manchester in 2006. The show opens with him and his team tracking down a serial killer and narrowly missing him. During the course of this short exposition, one finds Tyler is romantically involved with a Detective Inspector under his supervision, Maya.

Maya independently follows another lead to the serial killer, resulting in her kidnapping and leaving Tyler despondent. Struggling to collect himself after hearing of Maya’s kidnapping, Tyler stops his car to step outside and is promptly run over by a passing motorist. Lying on the street and in shock, Sam loses consciousness and opens his eyes. In 1973.

What happens after that is culture shock on the level of a sheltered Westerner’s first time in India.

Sam, in the 1973 world, finds his way to Manchester and Salford Police CID where he’s been documented to have transferred over from Hyde. He’s also a Detective Inspector serving under DCI Gene Hunt. The meat of this show revolves around the constant clashes between Sam’s 2006 procedure and ethics and Gene’s alcohol and rage infused way of things. While on the surface you think you want to root for Sam, one finds Sam a bit more conniving at times in light of Gene’s much more honest approach. 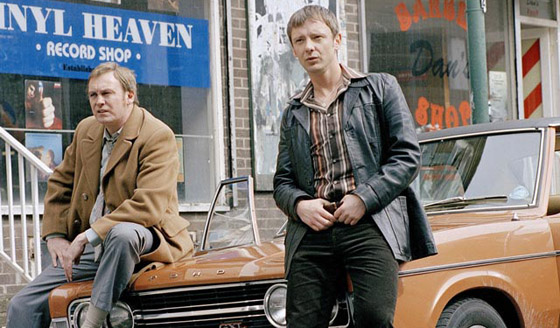 Other tangential but weighty issues include Sam’s acceptance of being in 1973 and constant questioning of the reality of his here and now, as well as how a more enlightened man of 2006 deals with sexism, racism, corruption and collateral damage caused to innocents during Gene’s investigations.

Sam’s time in 1973 is also peppered with teases of his 2006 life through nightmares and voices on the radio. Just enough to get him through his 1973 life, but occasionally working at cross purposes with his colleagues in his single minded pursuit to get back home. What happens when he does get home is the best ending of any T.V. series I’ve seen.