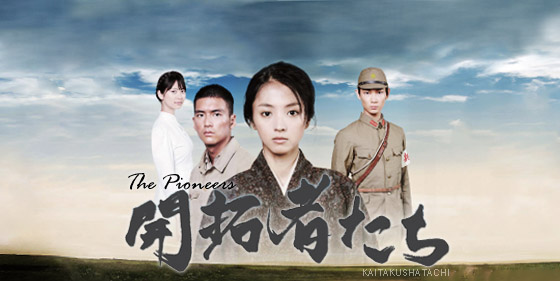 NHK’s four episode docu-drama, Kaitakushatachi, is one of the hardest things I’ve ever had to talk about. The challenges of watching a historical drama with documentary footage and interviews about a subject matter that I know very little about is one thing. Add to that the lack of subtitles on the NHK World Premium broadcast, and we got ourselves a big obstacle.

However, having Hikari Mitsushima as a lead in a very VERY serious project is too much to pass up just because there are no subtitles.

Kaitakushatachi, or simply The Pioneers, is a drama commemorating the 40th anniversary of diplomatic ties between China and Japan. Anyone with minimum knowledge about the region should know that Sino-Japanese relations are always a sensitive topic, which makes the project even more interesting from my perspective.

The story begins when a young Hatsu Abe (Mitsushima), who has left her siblings for the moment, arrives to Japanese-occupied Manchuria alongside a group of women who are to marry Japanese soldiers. Traveling with some of their belongings and a picture of the man they’re being married to, Hatsu meets her husband-to-be, Hayao Asano (Hirofumi Arai).

The women’s relationships vary depending on who they were and who they were paired with —  while Chie (Eri Tokunaga) and Shinsaku (Katsuya Kobayashi) seem to be drawn to each other quiet easily, Umeko (Sei Ashina) and Tsutomu (Yuta Kanai) are immediately averse towards each other during their first meeting.

When Hatsu finally manages to get her little siblings to Manchuria, all of them think that all they’ve got left is to thrive in this new prosperous place. The children study and have enough to eat. Hatsu’s family and the others in the community grow older — Hatsu’s older brother Kinji (Gou Ayano) and little brother Shiro (Takuya Ishida) become soldiers, while her little sister Tomie (Rio Yamashita) becomes a nurse. However, after the atomic bomb of Hiroshima in 1945, Russia invaded the zone in a declaration of war against Japan.

All of the Abe family and the Japanese that had settled in Manchuria over the years were displaced and told to go back, having to endure many different problems in their journey back to a place they weren’t calling home any longer. The Abe’s storyline is a sad one, being torn apart by the war and having Tomie stay in China while her siblings go back to Japan — considering the short time and all the years they had to include in the storyline, the character build up was quite good. Plus, all the accounts of the people interviewed for this docu-drama also give it a heightened human touch.

Mitsushima proves to be up to the task of leading this short project, her acting is intense enough and commanding most of the time. Though, at times, I felt more compelled towards Eri Tokunaga’s storyline — but then again, that’s because I have an attraction to melodrama. Chie and Shinsaku are torn apart due to the war, and Chie is left to fend for herself and her son. In a moment of desperation, she finds a good Chinese family that would be able to take care of her son — it’s a difficult moment and the most memorable scene in all the episodes of Kaitakushatachi.