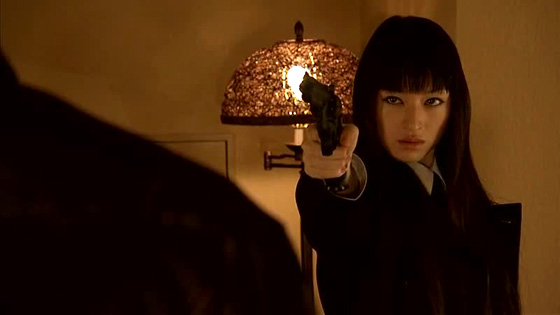 Chiaki Kuriyama is most known to international audiences as that crazy chick Gogo in Quentin Tarantino’s Kill Bill  — then again, no one cares about Quentin Tarantino’s stars unless they fit some mold Hollywood needs to fill, so actresses (model/singer) like Kuriyama go back to the tricky industry of Japanese entertainment where actresses make a living from endorsements.

Though Kuriyama has been involved in a series of film projects that includes some Steven Seagal movie called Into the Sun, Takashi Miike’s The Great Yokai War, Sang-il Lee’s Scrap Heaven and Mamoru Oshii’s The Sky Crawlers, she just hasn’t had a really big break in acting… unless you count the pretty interesting Satoshi Miki jdrama, Atami no Sousakan.

Himitsu Chouhoin Erika tells the story of a former spy agent named Erika (Kuriyama) who left the agency a year ago to form a family with an ordinary salaryman, Ryousuke (Toshihide Tonesaku) who has a child — Koutarou-kun (Junya Taniai, making his debut) — from a previous relationship. Feeling happy, but feeling a bit inadequate to be just a housewife, Erika is visited by her former boss, Souichi Tozuka (Tetta Sugimoto), who invites, or rather blackmails, her into becoming a private investigator for him.

To conceal her secret past life from her husband, Erika agrees to investigate cases of infidelities, cyber-bullying, rape and even cases of botch beauty surgeries… all of which turn out to be something more. With her strong sense of justice, Erika always finds herself on the right mindset to get bad guys, especially considering the feminist undertones in each an every case they get.

Though it is common to say that Japanese stars are skinny beyond belief, there’s something very feisty in Kuriyama’s eyes that makes you believe that she can really kick the crap out of you… or maybe that’s just traces from watching her being completely psychotic on Kill Bill — you choose. For all the attention we put on Erika, Kuriyama makes it work.

Himitsu Chouhoin Erika doesn’t exactly feel like an action detective story, despite having some scenes in which Erika punches and kicks — with an extra dose of pirouettes reminiscent of the first season of Buffy the Vampire Slayer. Instead, Erika relies quite heavily on its comedy, though I’ve never seen a Japanese drama that hasn’t relied on some comedy to tell its story.

Nevertheless, the show does feel episodic until now — halfway through its run or maybe more — starting with Erika not wanting to help her boss, but still getting coaxed to participate. A woman is always wronged (until now), and what seems a simple superfluous case turns out to be something more serious, ultimately with a happy ending where Erika reassures herself about how lucky she is.

Even if the show seems predictable, it is enjoyable enough to get you to sit through a couple of more episodes. Plus, Chiaki Kuriyama makes it bearable to watch without having to roll your eyes.

Here’s a YinYueTai link to the main theme song, Portrait of the Moonlit Night (月夜の肖像), sung by Chiaki Kuriyama and produced by Shiina Ringo. Apparently, Tokyo Jihen is backing Kuriyama as the band, too. The song is also inculded in Kuriyama’s album debut,CIRCUS.