Fresh Off the Boat – Season 1 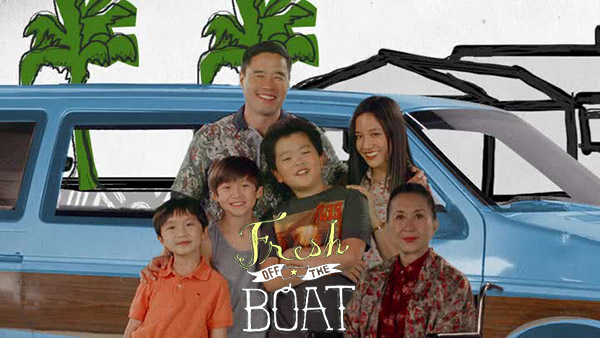 It’s nice to see a series like Fresh Off the Boat actually going through its first run a few years after my post on Asian Americans on American Media, and though I approached the show with loads of caution, first episode- I was in.

Based on Fresh Off the Boat: A Memoir by lawyer-turned-food-personality Eddie Huang, who does the voice-over as he recounts his life as a first generation Taiwanese-American lil’ kid (Hudson Yang) Tupac fan in mid-90s Florida, where his family has recently moved to make their American dream come true- Dad Louis (Randall Park) opening his own steakhouse restaurant with the nagging help of Mom Jessica (Constance Wu). Eddie’s two little brothers, heart-breaker Emery (Forrest Wheeler) and old-soul Evan (Ian Chen) alongside Grandma (Lucille Soong) join them in their struggle with cultural inadequacy and quest for a sense of belonging.

Similar to shows like The Wonder Years, Malcolm in the Middle or Everybody Hates Chris, Fresh Off the Boat relies heavily on Eddie Huang as a narrator to not only view the world he lives in through his point of view, but also to explain one or two jokes (eg. ep04. Success Perm — what happens to naturally-curled-hair Asians? Are we naturally successful?). Even though we are made to watch the story from Eddie’s perspective and young Yang plays the opposite of nearly every Asian boys/men stereotype by being a hip hop fan and being innocently-interested in girls who will dare to get a B in his report card, it is Eddie’s mother who is brilliantly played by Wu that makes me stick around for more.

Constance Wu is quite brilliant in here — I’m sensing another debacle here; is she Lead or is she Supporting??? What’s another Tiger Mom to do — and with these new Emmy changes [1], I wouldn’t mind her picking one if she’s competing for Lead Comedy Actress and do the Pimp Walk. She plays great with any of the regular characters, even with guests (eg. sister Connie played by Susan Park or her only bestie Honey played by Chelsey Crisp). Despite all her eccentricities [how to handle a crouton-eater worker, excessive-tea-bag user, Nightly News watcher, Stephen King fan, and the list goes on], she’s the Wing Beneath… her family’s wings!

The strongest moment of the series so far, however, makes itself shown on the pilot when the school’s only Black student Walter (Prophet Bolden) who, irked by the seemingly skin-deep newly-found ironic friendship between Eddie and the smug White boy Brock (Brady Tutton) over a Black rapper, drops the word “chink” infuriating Eddie and getting him into trouble. The other highlights of the show are Wheeler and Chen, who add their own charm to Eddie’s little brothers. Though Evan is more of your typical Asian kid dying over the fact that he’s about to lose his Always There Bear at school, his seamless inclusion in poker games with grandma [1] and gossip time with the neighborhood ladies [1] is to die for. While Emery also has his moments… PLUS! He’s a total lady killer [1]!

What Fresh Off the Boat needs more of is added Mandarin dialog– I don’t know any first generation immigrant home that doesn’t speak their mother tongue at home, especially with a Grandma that only speaks Mandarin. As a result, the Huangs feel like a 2nd or 3rd generation home (like mine), though I’d think it’d be hard considering Randall Park probably doesn’t speak fluent or just enough to pull off that amazing Dusty Knows Mandarin scene. That totally happened to my grandpa. True story.