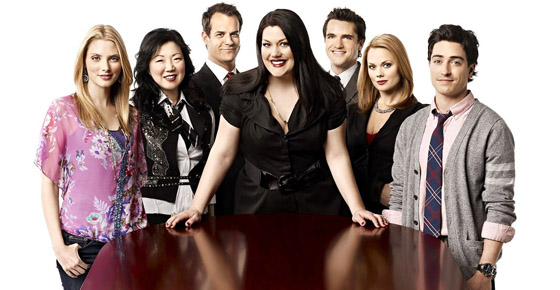 We are playing “catch up” with this review.

Drop Dead Diva is a 2009 Lifetime series produced by Sony, so it really isn’t a full-time drama as we’ve come to expect from Lifetime. It’s currently set out to start its third running season sometime this year.

In it, lousy aspiring blond model Deb — played in the beginning by Brooke D’Orsay, and sporadically throughout the series — gets involved in a car crash that ends her life. In another part of town, brunette plus-sized lawyer Jane Bingum (Brooke Elliott) gets shot and loses consciousness. She wakes up as Deb inside Jane’s body.

Drop Dead Diva is, over all that drama about self-image, a comedy that sometimes wants to cross that over-the-top line, but never quite gets it right. However, it’s got some sincere moments amongst the saccharine. Elliott is a likable lead as Deb inside Jane’s body. She is spunky and cute, though her moments of law brilliance to win cases are a bit too perfect most of the time.

The supporting cast is apt, though Margaret Cho is underused as Jane’s assistant. Even Ben Feldman, playing Jane’s guardian angel Fred, has a storyline that goes through more than one episode to develop a would-be relationship with the only other person that knows that Jane is Deb… Deb’s friend Stacy (April Bowlby).

Jane’s world revolves around the law firm she works for, which also includes Deb’s (widowed?) boyfriend Grayson, who is your typical good guy with the heart of gold and lets Deb know — through Jane’s eyes —  how much he misses her and loved her. And Deb must struggle with the fact that she can’t tell him who she really is.

The most interesting supporting character seems to be Kim (Kate Levering), a power-hungry, sex-hungry… and cake-hungry (?) — you’ll get it if you see the show — lawyer that’s working her way up the company. She’s good at being bad, she’s not a girl’s girl, but she’s got her moments. She’s strong, but seems vulnerable at times. She’s got a good balance.

Overall, Drop Dead Diva won’t be a life-altering experience, but it’s good enough to catch on television whenever it’s on.