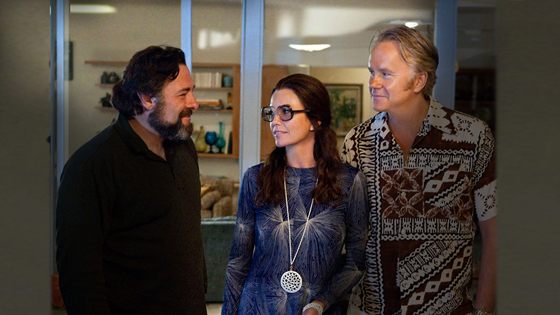 Directed by Shan Springer Berman and Robert Pulcini, a team of documentarians best known for directing American Splendor, Cinema Verite follows a fictionalized account of the production of An American Family, a 1973 PBS documentary series that is one of the earliest examples of the reality television genre.

Cinema Verite takes place in 1971 with producer Craig Gilbert (James Gandolfini) discussing with Pat Loud (Diane Lane) about the prospect of making a TV show documenting her family’s day to day lives. She considers the proposal and later accepts it, despite her older son Lance (Thomas Dekker) moving to New York and her husband Bill (Tim Robbins) travelling most of the time. Gilbert’s crew, Alan Raymond (Patrick Fugit) and Susan Raymond (Shanna Collins), moves in with the Louds and starts to film them everywhere they go.

Eventually, problems begin to happen not only with Pat and Bill’s marriage, but also with Gilbert and his crew regarding the documentary technique employed and the insane amount of time devoted to film many personal moments of the Louds family.

There’s a good amount of focus on Pat and Bill’s relationship, the technical aspects of shooting the Louds and there’s a side storyline with Lance’s homosexuality and his mother eventually accepting it. As far as the positives goes, the casting actually resembles the real Louds family very well — there are a few moments where you can see the original Louds on one side and their real-life counterparts on the other and the resemblance is very striking. Visually, the film looks pretty good and captures the 1971 era well in the details. Diane Lane — who earned an Emmy nomination for Lead Actress in a Miniseries or a Movie for Cinema Verite — was easily the film’s strongest asset, resembling the real Pat Loud from the original show convincingly. Gandolfini and Dekker were also good to watch acting-wise, but they don’t come close to Lane here.

However, Cinema Verite is not really entertaining or interesting. The set-up to the events starts as mildly intriguing, but it loses steam halfway through and is predictable because the ending to this has already been seen years ago. With the exception of Pat, Bill and sometimes Craig, there isn’t much drama or controversy seen among the rest of the family members. Sure, you could say that a mother supporting her gay son was something controversial during the 70s and that’s valid, but today it wouldn’t be seen as a big deal.

Half of the Louds family were almost non-existant here, even though they were prominently seen in the original series. And the scripting doesn’t make many of the real-life counterparts fascinating to watch — Tim Robbins as Bill Loud is the film’s weak link when compared to Gandolfini and Lane’s performances. The middle section of Cinema Verite drags on for the most part, while the final minutes are actually the most interesting to watch.

I’d recommend you to watch Cinema Verite if you enjoy watching Diane Lane and if you are actually curious about the predecesor to reality TV shows such as the ones you may stumble upon nowadays. Not exactly a strong TV film by any means, but it’s somewhat interesting to observe how people were different back then.

P.S: If you’re curious about the Louds, you can watch clips of An American Family here.