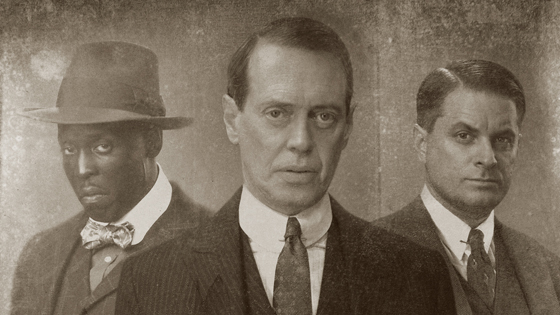 1924. Prohibition is still in force, and what will become the Federal Bureau of Investigation is closing in on criminal networks. After the literally explosive events of the previous year, “Nucky” Thompson (Buscemi) is recouping his losses and setting forth with new prospects. His brother and off-and-on second-in-command Eli (Whigham) is proud to send his son William (Ben Rosenfield) to university, but resents Nucky’s possible influence on the kid. Northside boss “Chalky” White (M. K. Williams) now runs the Onyx Club, but resents Nucky’s control within their partnership.

Boardwalk Empire’s latest season continues the show’s pattern of intermittent quality between dragged-out manpain and presumptuous moments of silence. Surprising subtleties, emotional twists, and astounding action keep the core audience happy, but what carries most viewers through the show’s peaks and falls are the characters.

Chalky White, for instance, finally has a more central role, with tensions coming his way via right-hand man Dunn Pursley (Erik La Ray Harvey), Harlem boss Dr. Valentin Narcisse (Wright), and singer Daughter Maitland (Margot Bingham). The latter, while a lovely and compelling presence, brings with her a plotline that rubs wrong against what we’ve seen of Chalky’s ties to his family.

There’s a thin line between depicting unfair consequences in an unjust world, and being unfair to a character’s personality and growth for the sake of shock and extra drama. That line can be debated with the fates of several characters here. Though I’d never want to meet most of these people, some, like disturbed dreamer Gillian Darmody (an excellent Gretchen Mol), tug on sympathies enough for me wish them at least a moment of happiness — preferably somewhere they can’t harm innocent people or themselves.

Characters often have a couple of episodes to shine before being pulled into the background or offscreen. Even loyal butler Eddie Kessler (Anthony Laciura) comes to the foreground for his share of comedy and tragedy, leading up to an episode named after the Goethe poem Der Erlkönig (The Erl-King); its opening stanzas translated here by Edgar Allan Bowring:

Who rides there so late through the night dark and drear?
The father it is, with his infant so dear;
He holdeth the boy tightly clasp’d in his arm,
He holdeth him safely, he keepeth him warm.

“My son, wherefore seek’st thou thy face thus to hide?”
“Look, father, the Alder King is close by our side!
Dost see not the Alder King, with crown and with train?”
“My son, ‘tis the mist rising over the plain.”

All the characters are stricken with worry and suspicion: regarding reputations, their own lives, their loved ones. The former Nelson Van Alden (Shannon) now anchors the Chicago storyline as unassuming florist “George Müller,” employed as an enforcer by Dean O’Banion (Arron Shiver) but pulled into operations with Al Capone (Graham) and Capone’s brothers Ralph (Domenick Lombardozzi) and Frank (charismatic Frank Spector). Nelson’s development throughout the seasons is fascinating, and this Midwest setting also brings to the screen welcome Capone shenanigans and stunning reenactments of gangland history. Masked hitman Richard Harrow (Huston) journeys to set things right with those he calls family; while Margaret (Macdonald), under the surname Rohan, reemerges later with a new life and a tempting financial offer. Arnold Rothstein (Stuhlbarg) finds his control of his operations and gambling faculties starting to slip, while protégés Charlie “Lucky” Luciano (Vincent Piazza) and Meyer Lansky (Anatol Yusef, with some quality screentime) attempt ventures together and apart.

With fine production as well as memorable performances (including those from guests like Patricia Arquette, Brian Geraghty, and Ron Livingston), there’s plenty to appreciate on screen even if plot turns come across cock-eyed. Tenth episode White Horse Pike is outstanding throughout, fulfilling the promise of arcs established not just episodes but seasons before. Afterwards, there’s a weak stab at contemplation before the season finale settles matters. Overall, while the pace and imbalanced focus could annoy or turn off many viewers, there’s still plenty to enjoy for fans who like watching these strivers trying to win and maintain the good life.